“Ultimately frustrating, though, for the questions it didn’t ask.”  Read on for the verdict on last night’s TV. 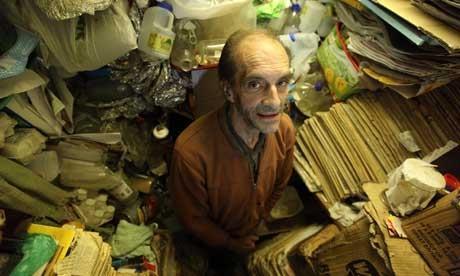 “It was clear from the start that Wallace was not entirely mentally well, and on occasion the programme verged on the exploitative, but drew back just in time and ended in heartwarming fashion..It was ultimately frustrating, though, for the questions it didn’t ask.”
John Crace, The Guardian

“What could have been a cruel curiosity show turned into a tale of hope. However there remained unanswered questions…we learned nothing about his general condition or the specific reasons why it was affecting him so badly. It also felt a lot of the time as though only half of the story was coming through, which was somewhat perplexing.”
Matt Baylis, Daily Express

“This was about not just the physical, but the psychological…And the film’s happy ending? That he admitted his problem, not by the crude instrument of a court order or the expert hands of a psychiatrist, but by lashings and lashings of community spirit.”
Alex Hardy, The Times

“There was something strangely melancholy about dear Nigel cooking those family Christmas dishes, with no family to eat them. “
Tim Walker, The Independent

“You know a Christmas programme is in trouble when the producer feels the urge for a Scottish sequence, and so it proved.”
John Crace, The Guardian

“A typical Stein production. Long on clichés with great-looking grub. As such, probably best viewed with the sound turned down.”
John Crace, The Guardian

“This condensed re-cap of the chef’s recent series, decorated with a few loosely Christmas-themed baubles, was presumably aimed at those vulnerable consumers still in search of a gift for their mum (ie Rick Stein’s Spain, £25). Every dish looked delicious but passing them off as Christmas dinner is surely disingenuous.”
Tim Walker, The Independent