“A lot of documentary makers treat television like a big chemistry set.” Read on for the verdict on last night’s TV. 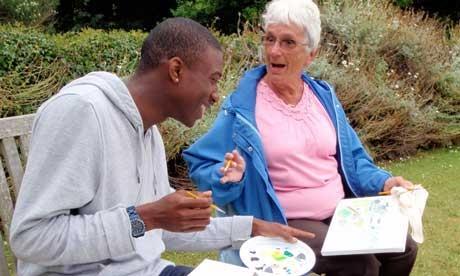 “A lot of documentary makers treat television like a big chemistry set, except they use people instead of magnesium ribbon, or whatever. Nobs and plebs – bang. Rich and poor, town and country, first world, developing world, bang, bang, bang. Now old and young.”
Sam Wollaston, The Guardian

“Uncomfortable, yes, but this show could do for old-age care what its BBC Two companion Can’t Take it with You has just done for wills — making the most cringey issue an easier talking point around the family or pub table.”
Alex Hardy, The Times

“I did find myself chuckling on a couple of occasions I’m afraid, against my better judgment.”
Sam Wollaston, The Guardian

“Far from being as annoyingly frenetic as it sounds, what stands out is its comfort in its own skin, its naughty spirit and its good heart. Most of all it does something that few sitcoms now seem wont to do: stacking itself with brilliantly tight, imaginative gags.”
Alex Hardy, The Times

“Gwynnie owns this episode. And she’s brilliant. We may have to rethink her.”
Sam Wollaston, The Guardian

“It all felt a little try-hard, but you couldn’t fault her tits-‘n’-teeth, gung-ho attitude. And at least this was an episode where the guest star actually starred, unlike the Britney special, in which the singer put in a 20-second dream sequence cameo and left the entertaining to the preternaturally talented cast.”
Alice Jones, The Independent

“It’s an acquired taste as documentaries go – macho and in-yer-face, with no qualms about showing needles stabbing around in collapsed veins.”
Alice Jones, The Independent

My Life in Books, BBC2

“With a set of squashy leather armchairs and book-piled coffee table straight out of Borders, it’s a hybrid of Desert Island Discs and Nigel Slater’s A Taste of My Life that doesn’t quite manage the cosy charms of either.”
Alice Jones, The Independent

When God Spoke English: The Making of the King James Bible, BBC4

“The nation was divided between moderate and radical Protestants who just about agreed on the point that the existing English-language Bible, written under Elizabeth I’s reign, was terrible.”
Matt Bayliss, Daily Express