“It’s certainly more fun than, say, Larksnore to Chocolate Box.” Read on for the full verdict on last night’s TV. 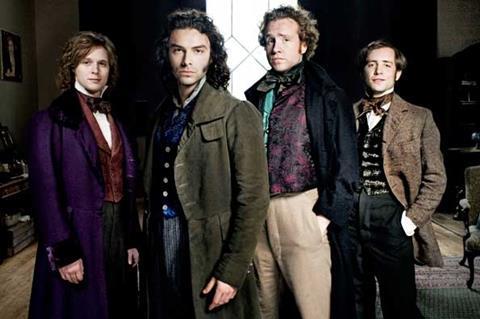 Desperate Romantics, BBC2
“Desperate Romantics does try hard to distance itself from other costume drama. This, it shouts, is un-costume drama: derobed drama. Look, no clothes. It’s certainly more fun than, say, Larksnore to Chocolate Box. But, in spite of some good performances, it’s neither as witty nor as funny as Entourage. It’s nothing like it, really: more of a jolly romp – with all that nudity, the suggestive sharpening of pencils, the incessant comedy bonk-along-to-brass oompah music. Not that a jolly romp isn’t an acceptable thing; we just need to reclassify it. So not Entourage with easels then, but Carry On Up The Studio. You can be on my canvas any time you like, darlin’!”
Sam Wollaston, The Guardian

Desperate Romantics, BBC2
“’Entourage with easels’ was reportedly how the executive producer referred to the BBC’s series, so what you get on the soundtrack is driving, rock-inflected music and what you get on screen is cheerfully and cockily vulgar.”
Tom Sutcliffe, The Independent

Desperate Romantics, BBC2
“It proved itself, in the end.”
Virginia Blackburn, Daily Express

Imagine… Art in Troubled Times, BBC1
“A timely two-part exploration of how recession affects the arts, was a big weighty slice of history and argument wrapped up with some rather lovely images.”
Andrea Mullaney, The Scotsman

Car Crime UK, ITV1
“I’m not entire sure what the point is of Car Crime UK other than giving Sir Trevor McDonald the chance to do what he does best, that is, stand around looking serious and delivering his lines with extraordinary vocal phrasing.”
Virgina Blackburn, Daily Express