“Too much much shouting, too much war.” Read on for the verdict on last night’s TV. 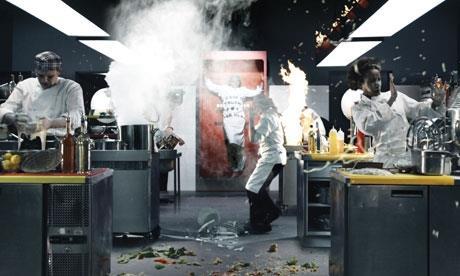 “A hybrid then – The Apprentice, MasterChef, Hell’s Kitchen. The Apprenterchef’s Kitchen. And I really can’t be arsed, to be honest. Too much much shouting, too much war. Give peace a chance.”
Sam Wollaston, The Guardian

“The only real problem is Marco Pierre White himself, who lurks around the place toying with a large chef’s knife like the villain in a straight-to-video movie…Even worse than this silly pantomime of menace is the way he delivers his lines. He seems to be aiming for granite obduracy. But he gets pure pinewood – a stiff, affectless manner that is more likely to make you giggle than cow you into compliance.”
Tom Sutcliffe, The Independent

“I wanted to like it, but couldn’t…But, let’s be honest, it’s not good – neither wonderfully anarchic nor wonderfully rude, as Pulling was. It lacks that conviction and confidence. It’s old-fashioned, unadventurous and, more serious still, unfunny.”
Sam Wollaston, The Guardian

THE MEN WHO MADE US FAT, BBC2

“I like Peretti’s naming of names as much as I did last week. But last night’s episode seemed a little keen to skip past some unhelpful caveats to his argument.”
Andrew Billen, The Times

“As so often, I would like to have seen an accountant look over the figures, but the recovery in Jeannie’s spirits was rather infectious.”
Andrew Billen, The Times