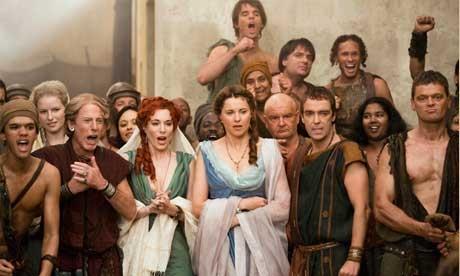 Spartacus: Gods of the Arena, Sky 1

“As with the original, what really pulls the absurdity into compelling shape is the small but potent amount of attention being paid to the emotional undertow.”
Lucy Mangan, The Guardian

“The investigation’s beauty: that it made Wilson into a normal man; one who had once forgotten the senior pass that should accompany his ticket, and had therefore been charged £139 for a single journey.”
Alex Hardy, The Times

Everything and Nothing, BBC4

“Al-Khalili is one of those cherishable scientists who understand that people make the world tick no less than particles.”
Brian Viner, The Independent

The Secret War on Terror, BBC2

“It was a coup for Taylor to extract a rare TV interview from the former head of MI5, Baroness Manningham-Buller, and she rewarded him both in last week’s programme and again last night with a series of perceptive insights that made me a little regretful that she’s not still top dog.”
Brian Viner, The Independent

“Of course there was nothing funny about the high profile contributors to Peter Taylor’s documentary but when President George W Bush asked his security team every week why they hadn’t found Osama Bin Laden yet, one source claimed the same answer was forthcoming: “Because he was hiding”.”
Matt Baylis, The Express

“What happened was pure character stuff, the timeless clash of two strong women, mother and daughter-in-law, that would make sense on any TV screen from Prestwich to Phnom Penh.”
Matt Baylis, The Express