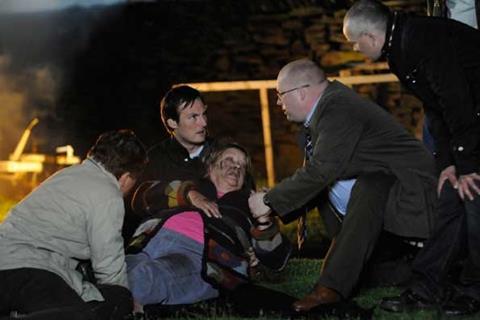 Blue Murder, ITV1
“It’s a good job the acting is high class in this rather dispiritingly formulaic police procedural, otherwise there’d be scarcely a reason to watch.”
Brian Viner, The Independent

Blue Murder, ITV1
“The emphasis seems to have changed from making this series about one woman’s personal struggle, typical of its era, to balance home and career, to just another cop show in which the single heroine is desperate to get a man.”
Virginia Blackburn, Daily Express

Blue Murder, ITV1
“Mostly Lewis sits about the office flirting with her colleagues, which I have to say, is an accurate depiction of working mothers. This made me trust those who researched the story about the British rural community as a hotbed for arson, foot and mouth, lesbianism, mad old ladies, dog fighting, sinister lone men with guns saying ‘get off my land’, and double murders.”
Helen Rumbelow, The Times

Daredevils, Channel 4
“The film made various half-hearted attempts to infuse Wim’s “seemingly superhuman ability to withstand the cold” with spiritual mystery… The programme never asked Wim any difficult questions about what the true roots of his compulsion might be… and Wim remained as cold and remote as the Arctic itself.”
Lucy Mangan, The Guardian

Daredevils, Channel 4
“Long before the end, I found myself not really caring less, but TV criticism is itself nothing if not a feat of endurance, and you’ll be impressed to know that I made it all the way through to the credits with no sustenance except a mug tea and a handful of Malteasers.”
Brian Viner, The Independent

Design for Life, BBC2
“Wouldn’t you like to see Sir Alan Sugar and Philippe Starck go bareknuckle, mano a mano, let the beat reality TV competition show guru win?… That would be entertaining. As for Design for Life, it shouldn’t be allowed.”
Helen Rumbelow, The Times

Saving Britain’s Past, BBC2
“A fascinating mood piece, provocative beyond its 30 minutes.”
Helen Rumbelow, The Times