“Certainly it’s gripping – involving, haunting, beautiful – in an unfriendly way of course.” Read on for the verdict on the weekend’s TV. 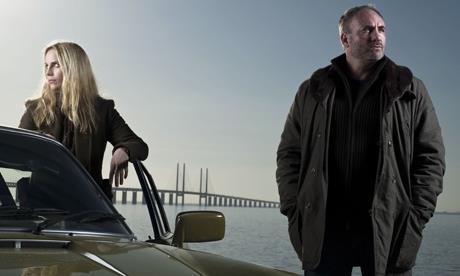 “It managed to serve Nordic crime fans with another superior subtitled Scandinavian thriller while adding a dash of the new.”
Andrew Billen, The Times

“No doubt this set-up has all sorts of cultural meanings we simply can’t get. What we can all get is a crime that by its nature forces two nations and two very different detectives to co-operate and unlike the detectives in a lot of dramas these two do so in a way that’s wonderfully funny.”
Matt Baylis, The Express

“Certainly it’s gripping – involving, haunting, beautiful – in an unfriendly way of course. It creeps up and wraps itself around you – not cosily, like a blanket, more like the mist coming in off the Baltic. Brrrrr.”
Sam Wollaston, The Guardian

“The Bridge turns out to be skilful, fresh and intriguing, beginning with a murder of gruesomely ingenious complexity and introducing a female detective who makes Sarah Lund look positively easygoing.”
Tom Sutcliffe, The Independent

“There was nothing remotely subversive or indeed, new about it’s take on showbiz: it’s hard and bitchy and wonderful, all at the same time. Yadda yadda.”
Andrew BIllen, The Times

“Sky Atlantic’s Spielberg-driven drama about the creation of a new Broadway show. But the interim verdict is that Smash isn’t one.”
Tom Sutcliffe, The Independent

“It dispelled most of my suspicions about the travel broadcaster.”
Matt Baylis, The Express

“It’s a bit formulaic too: she’s got her troubled past, tick; and her good humoured side-kick, tick; and there are the red herrings, and a twist in the end, tick, tick, tick … No, I’m not being wrapped in anything here. Perhaps it’s a just a bit British.”
Sam Wollaston, The Guardian

“Vera Stanhope, the central character in ITV’s returning drama Vera, has more empathy than she knows what to do with, played by Brenda Blethyn as a succession of motherly, wistful, and shrewdly intuitive looks.”
Tom Sutcliffe, The Independent