24 Hours in A&E The Salisbury Poisonings; Make Me Famous; I May Destroy You; Love, Victor; A House Through Time

“I must say this felt like an unbearable trauma overload” 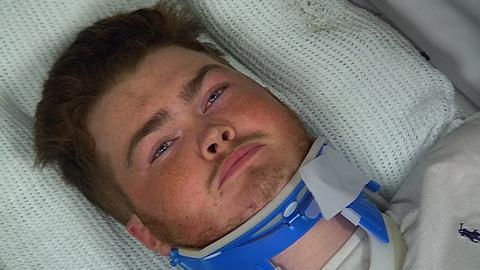 “It’s salutary to be reminded that the remit of the NHS reaches far beyond the Covid-19 crisis, but isn’t there something rather exploitative about zooming in on the plight of critically injured patients being rushed into the emergency room at St George’s Hospital in Tooting? This opener to the 21st series of 24 Hours in A&E was mostly concerned with a pair of motorcycle accidents, and the contrasting fates of their victims. Obviously the subjects have consented to be filmed, but I must say this felt like an unbearable trauma overload.”
Adam Sweeting, The i

“The power of this long-running series lies not in the close-ups of open wounds and neck restraints, but in the emotional stories told by the patients’ families. ‘The world just ended,’ Przemek’s wife Tatia said, describing how police told her of the accident. ‘I wished I had kissed him one more time so he wouldn’t be there, in the wrong place at the wrong time.’ No histrionics, no hand-wringing, but the way she said it was heartbreaking.”
Christopher Stevens, Daily Mail

“All three central performances – Duff, Spall and the underrated Buring – were warmly believable. Director Saul Dibb kept flashy touches to a minimum yet gave it propulsive momentum and an immersive feel. Screenwriters Declan Lawn and Adam Patterson come from a current affairs background, having cut their teeth on Panorama, and created an authentic documentary texture. Never more so than during the dignified closing sequence, which saw the real people take a bow – including, poignantly, a cute home video of Dawn dancing with Gracie. She did indeed have a bit of life about her.”
Michael Hogan, The Telegraph

“By this point it had become clear that Dawn Sturgess was the real reason for a three-parter that’s had a slightly unconventional dramatic shape. After Sunday’s horribly tense opener, and what had seemed to be a story about the unheralded heroism of the public-health director Tracy Daszkiewicz, the finale had a different power of its own: a sense of injustice. The episode settled into a kind of extended epilogue, suffused in sadness and continued trauma (both Dawn’s boyfriend, Charlie Rowley, and Detective Nick Bailey are recovering from Covid), and which ultimately made its purpose clear. Forget Russian spies, an innocent woman was murdered and the Sturgess family still has questions.”
James Jackson, The Times

“This was a timely one-off drama exploring the impact of reality TV. Written by Reggie Yates, it didn’t entirely work but was admirable in its intent and compelling nonetheless. Rather like the reality shows it portrayed, in fact. The script didn’t lay blame at any one door. The show’s were manipulative, sure. So were the agents and brand managers keen to cash in. The public wanted a piece of Billy, then ruthlessly turned on him. Pressure came from all directions, including within. BBC Three has carved out a strong reputation for single dramas tackling social issues that affect young audiences: about domestic violence, debt, honour killings and bullying. This one won’t win any Baftas, like several of those did, but still made its point powerfully – and in the multi-talented Yates, it might just have discovered a new dramatic voice with genuine potential.”
Michael Hogan, The Telegraph

“Four episodes in and it’s official: I May Destroy You is the most jaw-droppingly risky drama of the year. The BBC executives must have been hopping with excitement when they read the scripts — the quest for relevance with younger audiences having long surpassed worries about upsetting the fainthearted. For all its troubling view of sexual consent, Coel’s storytelling has a confidence and wit that makes it fly along. Whether it can pull this off for another eight episodes remains to be seen, but we can be sure of one thing: it’ll be fearless.”
James Jackson, The Times

“What made the film Love, Simon feel momentous was its scale, both aesthetically and emotionally, a slick, swelling rush of crowd-pleasing big-screen romance treated with the same gravity and pomp as the film’s many, many straight peers, but in a longer, cheaper and more mundane format, this feels like less of a bold statement and more of a half-hearted rehash. Not that every queer story needs to be grand, but the makers of Love, Victor could have benefited from setting their sights a little bit higher. The show does briefly dabble with knottier issues of performative gender roles and inherited bigotry, it’s a mostly easy ride, a slightly gay version of a CW show but arguably, given how horny that network has become, way more sexless.”
Benjamin Lee, The Guardian

“Setting the third series of A House Through Time in Bristol was an inspired move by presenter and history professor David Olusoga. His chosen house – No 10 Guinea Street – was built in 1718 by the slave-trafficker Captain Edmund Saunders. While there was plenty of material for Olusoga to work with in earlier episodes, this finale suggested that No 10’s history was gradually drying up. After detailing the death of the Longs within a few months of each in the early 50s, Olusoga spent ages excavating the chequered past of a tenant called Cyril Tabrett, a man of mystery who had several birth dates and professions. He even claimed to be Belgian. It turned out, though, that he was just a petty thief and forger.”
Adam Sweeting, The i