“Series three looked fresher and funnier than the last.” Read on for the verdict on last night’s TV. 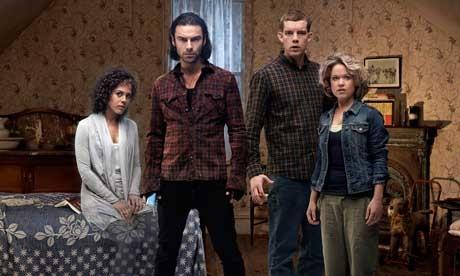 “OK, so communicating with Annie though the static of old televisions was a lift from Life on Mars but otherwise, series three looked fresher and funnier than the last.”
Andrew Billen, The Times

“It’s certainly spectacular, I just wonder if it’s lost some of the intimacy it had in its early days in Bristol, and the humour. It’s still great, fantasy for the non-nerd, about as natural as the supernatural gets.”
Sam Wollaston, The Guardian

“If you’re impatient with this kind of parapsychic bric-à-brac, then Being Human will probably not be for you. But there are things about the series that should hold impatience at bay, even for the most tetchily rational of viewers. Even if you haven’t been bitten by the vampire craze, there’s a lot to enjoy here.”
Tom Sutcliffe, The Independent

“The Killing is Denmark’s answer to the mighty Wallander. Taking a hint from the piecemeal, ultra-realistic pacing of US shows such as The Wire and Mad Men, this looks like being a slow burn effort rather than an instant hit.”
Matt Baylis, The Daily Express

“Saturday’s double bill was incredibly watchable, knocking most British crime drama into a coma and giving Sweden’s a run for its Krona too.”
Andrew Billen, The Times

“The Killing (BBC4, Saturday) is fantastically moody and bleak, as you’d expect from a Scandinavian detective drama (Danish this time – doesn’t the sun ever come out over there?). But it’s also very real and very human.”
Sam Wollaston, The Guardian

“Anyway – clichés aside – The Killing is seductively good, each episode devoted to just one day in the evolving murder investigation of a young girl, which appears to have some connection with a leading candidate in an upcoming election.”
Tom Sutcliffe, The Independent