“It wasn’t about the men, or their machines per se, but about the relationships around them.” Read on for the verdict on last night’s TV. 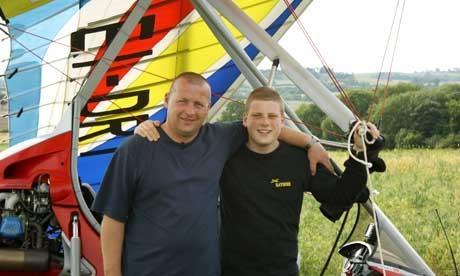 Wonderland - The Real Magnificent Men in Their Flying Machines, BBC2

“Something Antony is good at though is being on television. He’s one of those bumbly posh people who is self-deprecating and hopeless, though not quite as hopeless as he makes out. Clever, open, honest, impossible not to like. A lot of the charm of this charming film is down to Antony.”
Sam Wollaston, The Guardian

“Richard is something of a star in the world of microlighting, having flown all the way to Australia in one and over the top of Everest too. “Flying a microlight is no more dangerous than driving your car down the road,” he said a little impatiently – a statement put into perspective by the sight of him struggling to refuel his aircraft in mid-flight.”
Tom Sutcliffe, The Independent

“As these microlight fanatics gathered for their three-day round-Britain rally there must have been plenty of male wind-bagging about wing spans  and wind speeds. The film-makers chose to ignore this and produced something that was far more about male friendship and the simple love of being up in the air.”
Matt Baylis, The Express

“It wasn’t about the men, or their machines per se, but about the relationships around them – at times as precarious as the vehicles keeping them in the air.
Alex Hardy, The Times

“In the old days we (Colchester was once my home town) were left there – to wake up wondering what the hell happened if we were lucky, more likely to choke or freeze to death. But now there’s something called an SOS Bus, a warm place, staffed by saintly volunteers and paramedics, who revive, patch up and mop away.”
Sam Wollaston, The Guardian

“A grim reminder of just how unflattering inebriation can be. Then again, virtually anybody would be likely to think of themselves as abstemious after watching this portrait of Colchester in party mood.”
Tom Sutcliffe, The Independent

“It was a nicety fit for a Corrie modern classic, which Becky now is. We’ve watched her spectrum creep from nearly-all-nasty to nearly-all-nice over six years, and Kelly is a deeply skilled actor; able to communicate every hue of good, bad and backstory even as Becky’s mood swings several times within one sentence.”
Alex Hardy, The Times