“It was like the climax of an indulgent 70s heavy metal attack.” Read on for the verdict on last night’s TV. 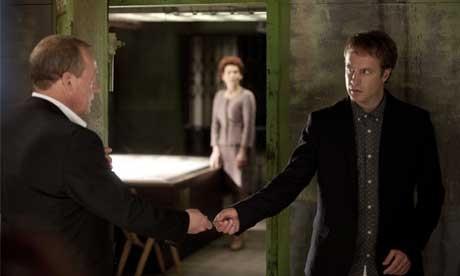 “Spooks has often relished the pleasure of a good explosion in the past, but it declined to go out on one, despite the promising possibility of shooting down a civilian airliner over central London.”
Tom Sutcliffe, The Independent

“It’s a show that has always been happy to sacrifice its lambs, regularly sending beloved characters face-first into the deep fat fryer or the sawmill. But that’s exactly why the last Spooks should have made an effort to offer us something else.”
Matt Baylis, Daily Express

“It was like the climax of an indulgent 70s heavy metal attack, all banging drunks and screaming guitars, licks and twists, and you think that’s it, but then there’s a bit more, all turned around up to 11.”
Sam Wollaston, The Guardian

“It’s the loopiest thing we’ve seen so far. This series doesn’t have a sense of direction, of going anywhere, as the first did. They’re just throwing anything and everything at it.”
Sam Wollaston, The Guardian

“Footage of shells exploding in the canopies of trees, bringing down large branches and sharp splinters did give you some sense of the terror of such a moment.”
Tom Sutcliffe, The Independent

TALES FROM THE NATIONAL PARKS, BBC4

“At first I feared that Tales from the National Parks would be too large a canvas for him. But a park is only as wide as the committee charged with tending it, and the Lake District National Park Authority was certainly not capacious enough to deal with the ambitions of a passionate maverick called Mark Weir.”
Andrew Billen, The Times

THE ONLY WAY IS ESSEX, ITV2

“Dr. Goebbels would have sold someone’s granny to be able to dehumanise and mock a whole class of people this efficiently.”
AA Gill, The Sunday Times