“Off with the head (and tail) as it were.” Read on for the verdict on last night’s TV. 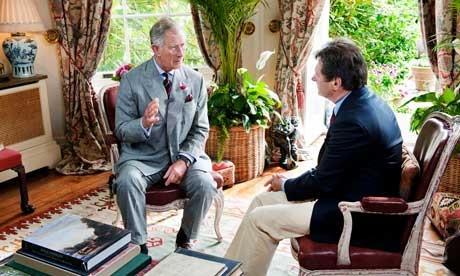 “This documentary was a victory parade around the Prince’s Cotswolds estates…As an attempt to humanise our coming king, it failed, however, and thgrough no fault of its own. Its subject is an odd guy.”
Andrew Billen, The Times

“No matter what you think of the royals…it’s difficult not to find them interesting….Perhaps, BBC producers, it would have been better to keep things short but sweet. Axe the bumf and stick to 30 minutes. Off with the head (and tail) as it were.”
Alice-Azania Jarvis, The Independent

“Charles may, as he claims, listen to his trees, but he’s not very good at listening to people. It probably comes from having spent his entire life surrounded by people nodding and agreeing with him. And that’s probably also what’s led him to believe that he has something interesting to say.”
Sam Wollaston, The Guardian

“This show will suit freshers newly abandoned in university common rooms, the drunk and fans of Ricky Gervais’s hyena-like cackle, if there are any.”
Andrew Billen, The Times

“He talked about the whole rea with a lot more passion and humour than he has done in previous segments of the show…It’s good to see a bit of gusto, even if you don’t agree with the argument.”
Matt Baylis, Daily Express