“There’s going to be a huge hole in the ITV evening schedules come September.” Read on for the verdict on last night’s TV. 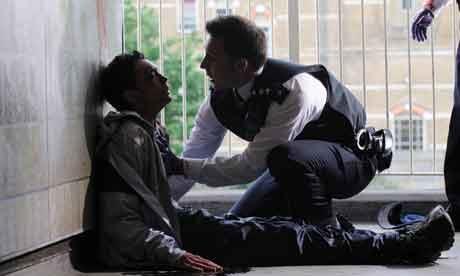 “The Bill has proved too realistic for its own good and viewers have switched off. Which is a shame because it’s still very well done: the acting is believable, the plotlines relevant and topical, while the shaky handheld camerawork brings an immediacy and excitement to the chase scenes. Ultimately, though, times and tastes have changed.”
Mike Mulvihill, The Times

“I couldn’t help but wonder why this had been singled out for redundancy while other uniformed strands still pound the beat with full job security… What followed wasn’t exactly The Wire, but it did hint at the dynamics of gang life on a south London estate.”
Tom Sutcliffe, The Independent

“The Bill has been pushed about as if no-one could quite work out what kind of show it really was… if ITV didn’t seem to have any confidence in the programme, why should the viewers? Someone might have come up with the idea of trying to cut budget costs, rather than axe the show entirely. It’s not as if there are any other decent cop shows…and there’s going to be a huge hole in the ITV evening schedules come September.”
John Crace, The Guardian

“It’s The Abyss in disguise. I lost my bearings again almost as soon as the episode started…but it never takes very long to work things out in a drama pieced together from the clichés left over from previous similar projects.”
Tom Sutcliffe, The Independent

“It was clear that the Chawners were a dysfunctional family with severe emotional problems who need intensive psychological help rather than a TV crew in their front room.”
John Crace, The Guardian