“The best drama doesn’t always come up with a definitive answer and this one didn’t. It was pacey, emotionally engaging stuff.” Read on for the verdict on last weekend’s TV. 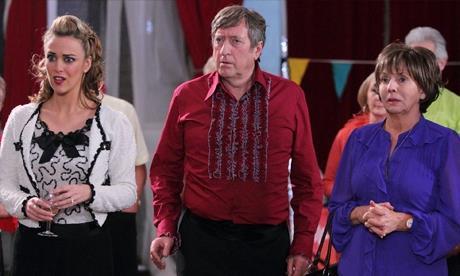 “The reason Sugartown ended up going out at 10.25pm was solved by watching it. It was terrible…the pace is so slow and the plotting so obvious.”
Andrew Billen, The Times

“I cannot for the life of me work out why BBC1 are transmitting a children’s programme at 10.25pm on a Sunday, though it’s hard to see Sugartown as anything else, so guileless is its plotting and so jauntily empty of threat are its characterisations.”
Sam Wollaston, The Independent

“For a comedy drama it was neither funny nor dramatic. No cliche was left unturned, all the characters were blunt, straight-talking but with hearts of gold and the storyline was all over the place.”
Virginia Blackburn, The Daily Express

“Lacks originality but worked so well that by the end the party of imperious North London event organisers, their local hosts and this viewer were all in tears.”
Andrew Billen, The Times

“There have been a few reality shows along similar lines recently…Holiday Hijack is just the latest in the genre.”
Sam Wollaston, The Guardian

“It’s easy to become a little cynical about the format and its glib moral instruction.”
Tom Sutcliffe, The Independent

“It was utterly gripping stuff.”
Virginia Blackburn, The Daily Express

“The best drama doesn’t always come up with a definitive answer and this one didn’t. It was pacey, emotionally engaging stuff.”
Virginia Blackburn, The Daily Express