“It must have been fantastically liberating and modern – and shocking to many of course – in the 20s, but now it feels just a little bit pretentious.” Read on for the verdict on last night’s TV. 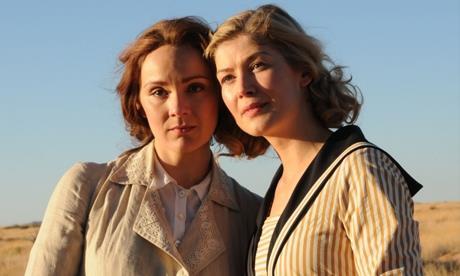 “It must have been fantastically liberating and modern – and shocking to many of course – in the 20s, but now it feels just a little bit pretentious. We’re cooler about all that stuff, just get on with it. Stop making such a bloody song and dance about it.”
Sam Wollaston, The Guardian

“After the sexual revolution and women’s liberation, Lawrence’s sexual philosophy looks at best like a late corruption of the Romantic movement and at worst comical.”
Andrew Billen, The Times

“Still, there’s more to the Women in Love than just lust. Thanks, in large part, to the strength of Pike and Stirling’s performances, it resists the temptation to become period smut. Instead, we are offered a quietly engaging depiction of change through the generations.”
Alice-Azania Jarvis, The Independent

“Over six gruelling days in Morocco, James is attempting the near impossible: to become the dullest man to have ever been on television. And guess what, he only goes and does it. By a mile.”
Sam Wollaston, The Guardian

“Nesbitt, for me, has become one of those celebrities. One of those people you can’t watch without thinking one thing – in this case: “hair!” He has assumed an identity in his own right. A distracting, giant hairpiece of an identity.”
Alice-Azania Jarvis, The Independent

The British At Work, BBC2

“In short, apart from the opportunity to see Young doing an impression of Yosser Hughes, this programme offered absolutely nothing original on the subject of the Eighties.”
Matt Baylis, The Express