“If you only get into one so-bad-it’s-good TV show this year, make it this one.” Read on for the verdict on last night’s TV. 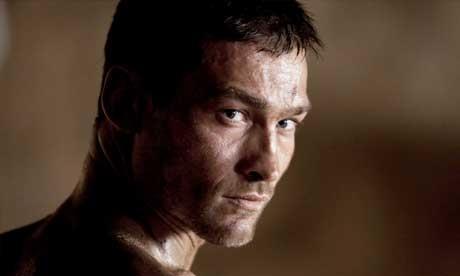 “It more than lives up to the hype…it doesn’t take itself at all seriously – there’s plenty of comedy to be found. It’s up to you to work out just how much is intentional.”
John Crace, The Guardian

“This is a take on ancient history that the Nuts mag team probably would have produced — if they’d had some Tourettes slipped into their tea, and had a guy from The Matrix in for work experience… but if you only get into one so-bad-it’s-good TV show this year, make it this one. Because its utter preposterousness is thoroughly embraceable.”
Alex Hardy, The Times

“Cut the violence out of Spartacus and you’d be left with a 30-second commercial for an unusually brutish male cologne called Gladiator. It is, as my sons occasionally say, “sick”, which you can take as warning or recommendation depending on your age group.”
Tom Sutcliffe, The Independent

“Mr Fry looked like a genuine fan. At the same time, he knew sufficiently little about music to be able to explain it engagingly to an audience most of which probably knew even less.”
Matt Baylis, Daily Express

“This was an affecting, personal film… This wasn’t Fry the all-purpose TV know-all; this was Fry the moral relativist, a person like the rest of us who goes through life not always certain he has made the right decisions. It made me remember why I used to like him so much.”
John Crace, The Guardian

“I haven’t seen [Fry] so excited since he got a sneak preview of the iPad. And somehow it worked. His admiration of Wagner was not a badge of intellectual superiority but a revealed compulsion; not a pompously dignified thing but a potentially undignified one.”
Tom Sutcliffe, The Independent