“It’s about spectacle, entertainment, theatre, circus.” Read on for the verdict on last night’s TV. 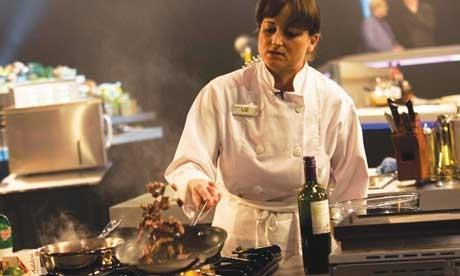 “A show forged in the mighty fires of showbiz hell, a parody of a parody, and so self referential it hardly knows which way is up. Camp, contrived and OTT. The show’s natural audience…are clearly assumed to be either stoned or senile.”
Sarah Vine, The Times

“It’s really just MasterChef in a high speed blender. (5pm) is a strange time to schedule the show although children will probably love it.”
Brian Viner, The Independent

“This is not really about the food. It’s about spectacle, entertainment, theatre, circus. And it is fun, even though I don’t really have a clue what’s going on.”
Sam Wollaston, The Guardian

THE HISTORY OF SAFARI WITH RICHARD E GRANT, BBC4

“It does seem slightly odd that no-one in television thinks these destinations worthy of viewers’ attention unless they can be experienced through the prism of fame.”
Sarah Vine, The Times