“Less of a reality show and more of a show about reality.” Read on for the verdict on last night’s TV. 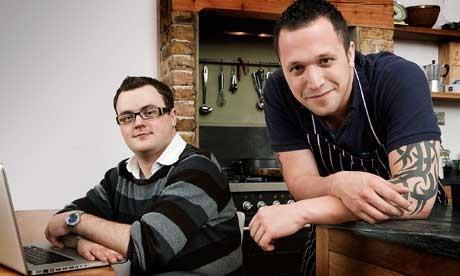 OUT OF THE FRYING PAN, BBC2

“Would you really have wanted to hire them to feed your own guests? I doubt it, frankly, however diverting it might be to watch them serve other people.”
Tom Sutcliffe, The Independent

“There was a sort of honesty…making this less of a reality show and more of a show about reality.”
Matt Baylis, Daily Express

“It could be the editing, but for high-end caterers James and Alasdair seem kind of hopeless. Between them they appear to have more ambition than sense. Perhaps that’s why the producers wanted to do a show about them.”
Tim Dowling, The Guardian

“If there is to be a fourth season of Damages…the challenge is to find a way forward. Still the joy of this season has been the compelling performances.”
Debra Craine, The Times

“Damages finally concluded with an episode so complicated that I’m still not sure I can work out who did what to whom….Large mysteries remained, including the unsolved crime of how we’d all been persuaded that these factitious enigmas required our weekly attendance.”
Tom Sutcliffe, The Independent

“The extremes of the Eighties were echoed in the characters, so that it was very hard to care about them.”
Matt Baylis, Daily Express

“Money does a good job of walking the tightrope between funny and frightening.”
Tim Dowling, The Guardian

“If this show gets any more intense I’m going to explode…There is a haunting desperation in Sons of Anarchy that speaks to us at the most visceral level. I love it.”
Debra Craine, The TImes