“Fresh, funny and rather fearless.” Read on for the verdict on last night’s TV. 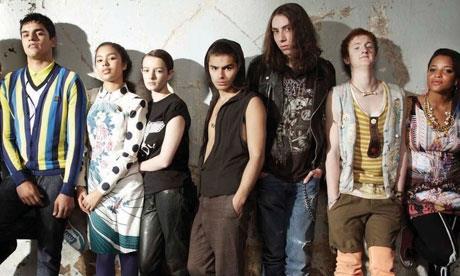 “Ugly duckling seeks place in high school is hardly a new plot, but that is because it is such a common, perhaps universal, adolescent narrative. Here Sean Buckley’s writing was fresh, funny and rather fearless, confronting how cruel school can be.”
Andrew Billen, The Times

“The programme’s success has been based, largely, on its ability to accurately reflect teenagers’ lives, as well as the lives they aspire to, the drugs they want to be taking, the parties they want to be going to. Last night looked likely to continue the tradition.”
Alice-Azania Jarvis, The Independent

“In the past Skins has been sad and difficult and occasionally beautiful, much like teenage. And if it hasn’t perfectly reflected reality, it has certainly had some basis there – like one of those wonky distortive fairground mirrors that produces a scarier version of the real you. So far, this lot just seem a bit sillier.”
Sam Wollaston, The Guardian

“In Collins, Channel 5 has not sent an idiot abroad but a faux naïf. I still found his travelogue narrowing the mind.”
Andrew Billen, The Times

“Let’s face it, if you want to make a programme about a nation of relatively small, hairless, neat and dignified people, then a big, hairy, shambling Bristolian is an inspired choice to front it.”
Matt Baylis, The Daily Express

“Anyway, Justin Lee Collins is here to show us a few more, in Justin Lee Collins: Turning Japanese. It’s not quite clear why he’s been appointed as guide – “I don’t like manga or robots,” he clarified early on, “and I’ve never been this far from home” – but it doesn’t really matter. He’s charming enough and Japan’s odd enough for the two to work just fine.”
Alice-Azania Jarvis, The Independent

“ITV could do worse than bring back a second series of this. It’s so much better than everything else it does.”
Alice-Azania Jarvis, The Independent