“Stuart was a know-it-all but his lines were subtly humorous and poignant.” Read on for the verdict on last night’s TV. 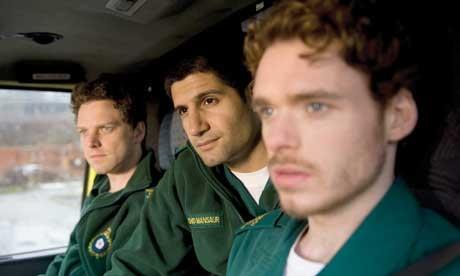 “It wasn’t just the strong casting, it was also the nuances of the script and presentation. Stuart was a know-it-all but his lines were subtly humorous and poignant.”Alex Hardy, The Times

“Matching the words to the pictures is a challenge that on the whole brings the best out of the BBC’s commentary team, and after all is what television commentary is all about, but sometimes they get thrown by the visuals, and have to drop in an abrupt reference to Billie Jean King in the royal box during an in-depth analysis of Murray’s backhand.”
Brian Viner, The Independent

Made in Britain, BBC2

“Last night’s programme began with a chase over urban… It was meant as a visual metaphor for the economics of the last two centuries, with Britain getting ahead and desperately trying to stay ahead, which was a little bit fanciful.”
Brian Viner, The Independent

“I’d like to have been told more about what the situation is in this country, but our prison system isn’t as cooperative with the media as the Americans are. They may lock up more people than anywhere else, but they also let in more camera crews. That openness should be applauded and must lead to a better understanding of what actually goes on in these places.”
Sam Wollaston, The Guardian

“According to Dr Scott’s lively narrative the war-obsessed Spartans were doomed precisely because they turned their noses up at luxury.”
Matt Baylis, The Express

“One of the enjoyable things about this show is that the logic of Fernando’s advice isn’t always immediately clear.”
Matt Baylis, The Express