“I couldn’t help but think it would have been done better by the British.” Read on for the verdict on last night’s TV. 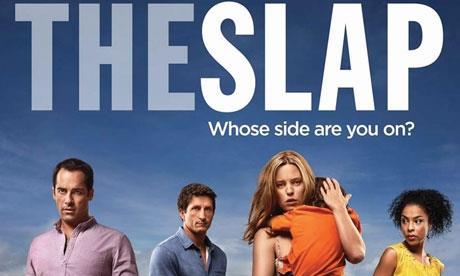 “I couldn’t help but think it would have been done better by the British… The adaptation didn’t take enough liberties. It should have been even more polite, nuanced and awkward. Less Aussie, in short.”
Helen Rumbelow, The Times

“It is only thanks to the foreknowledge of the story’s premise that there is any degree of tension underlying the tedium. And the characterisation is even thinner than the plot – a particular handicap when you have a set of protagonists who so far seem fairly unsympathetic. You need complexity to draw you in. That said, things don’t half pick up after the blow has been dealt. Even the most disinterested viewer suddenly finds him or herself galvanised.”
Lucy Mangan, The Guardian

“[The narrator] unfortunately, sounds distinctly smug about the fact that he knows a lot of stuff we don’t…Tsiolkas’s original book cleverly exploited the fact that this indefensible action (the slap) would provoke a defence and that all kinds of allegiances would find themselves tested by it. This well-acted and faithful dramatisation preserves all that, along with the book’s multi-perspective structure.”
Tom Sutcliffe, The Independent