“A cheering reminder of the life-changing work doctors can do.” Read on for the verdict on last night’s TV. 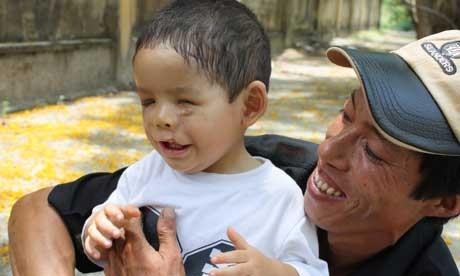 The Baby with a New Face: Extraordinary People, Channel 5

“You watch it – say it’s somebody else trying to comfort their postoperative toddler. You summon up all that they are going through, the suffering and impotence and desperation. Then bosh, credits roll; it’s not your kid, it’s their kid. Phew. Anyone fancy some Doritos?”
Zoe Williams, The Guardian

“While traumatic, the story was a cheering reminder of the life-changing work doctors can and do undertake in modern times.”
Virginia Blackburn, The Express

“It doesn’t function as a competition because there is no constant: they all serve different food to different people. The only still point is Marco, and the only reliable element of his personality is this vaudeville cantankerousness.”
Zoe Williams, The Guardian

“If we want the beautiful estates in this country and our near neighbour overseas to remain intact, and many of us do, then we have to sympathise with the Shelswell-Whites, not least because they’re preserving their heritage for everyone, not just their family.”
Virginia Blackburn, The Express

“Like all episodes of this series it delivered the ignoble but reliable pleasure of finding out that what looks like a dream may actually be a daily nightmare.”
Tom Sutcliffe, The Independent

Who Betrayed the Bomber Boys, BBC2

“Alex Beetham’s well-meaning film was not well enough resourced or written to give an equivalent TV memorial, but it did, in a meandering way, answer the question in the title.”
Andrew Billen, The Times

The Men Who Made Us Fat, BBC2

“Disappointingly on its final outing it stopped naming names.”
Andrew Billen, The Times

“For the kind of viewer who wouldn’t dream of watching a Paul Mason report on the consequences of the Greek debt crisis it was probably reasonably informative.”Tom Sutcliffe, The Independent