“Comedy’s one thing, but this show needs to take the cooking to the next level.” Read on for the verdict on last night’s TV. 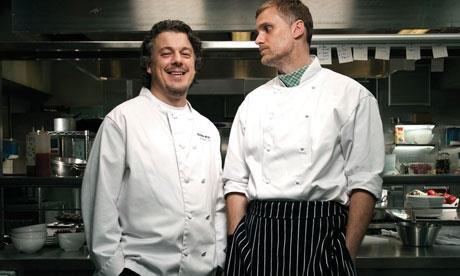 “It’s all in the eating and the first couple of forkfuls of Whites were a little ominous. But then it all began to come together. Writers Matt King and Oliver Lansley also found room for something more oblique, even in an episode that had its hands full establishing the basic characters. I’ll be going back for another course.”
Tom Sutcliffe, The Independent

“If it sounds surreal, inventive, original and hilarious then I’m over- selling it. It’s gentle, subtly played, often funny and quite promising. At times it got a bit predictable…My main criticism of Whites is that it doesn’t actually offer much new insight into the workings of a restaurant kitchen. Comedy’s one thing, but this show needs to take the cooking to the next level.”
Tim Dowling, The Guardian

“A definite improvement on Chef…It had some great lines, two gorgeous cameos..and an intriguing storyline.”
Andrew Billen, The Times

“Both have moved away from social comment into pure characterisation, full of precision and nuance. It is the nature of sketch comedy to be hit and miss, but these two don’t miss often. Their aim is still pretty good.”
Tim Dowling, The Guardian

“There’s no doubt that both are brilliajnt actors and mimcs but strengths can sometimes be weaknesses and the pleasure they take in the ir various roles seems to make them reluctant to get off the stage.”
Matt Baylis, Daily Express