“It may have been massaging the truth or using only carefully chosen examples but it suggested things were mighty different in Jane Austen’s day.” Read on for the verdict on last night’s TV. 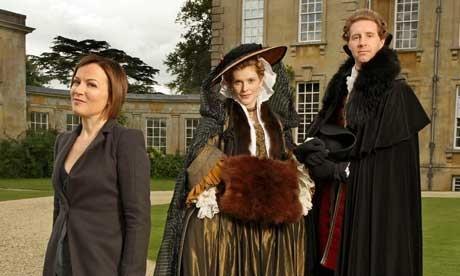 At Home With the Georgians, BBC2
(Matchlight)

“It may have been massaging the truth or using only carefully chosen examples but it suggested things were mighty different in Jane Austen’s day.”
Matt Baylis, The Express

“Though she knew him only from his letters, (presenter) Professor Vickery seemed quite taken with him. When a portrait showed him to be jowly and rather ugly, she was positively bereft.”
Tim Dowling, The Guardian

“She was taking issue with the notion of the domestic realm as a female-dominated sphere, arguing that men were just as likely to yearn for wedding bliss and a successful home life as women.”
Alice-Azania Jarvis, The Independent

“A trip to London was Vicky’s first time outside York. They visited television studios, met celebrities (or at least Piers Morgan and Amanda Holden).”
Alice-Azania Jarvis, The Independent

“Almost from the start, Anne-Claire PIlley’s oddly incurious film made me uneasy…after a montage of soppy moments, a caption informed us the pair had called for their engagement and were living apart. The compassionate and indeed professional option would have been for her to have been to…abandon it”
Andrew Billen, The Times

“Were its 2.5 million viewers fascinated to see Sarah Beeny make good on her vainglorious purchase of a stately pile by turning it into a wedding venue? Or did they hope to see the women who did so much to fetishise property greed end up destitute?”
Andrew Billen, The Times