“DCI Barnaby was no more gripping a character as the end than he’d been in the middle or anywhere else.” Read on for the verdict on last night’s TV. 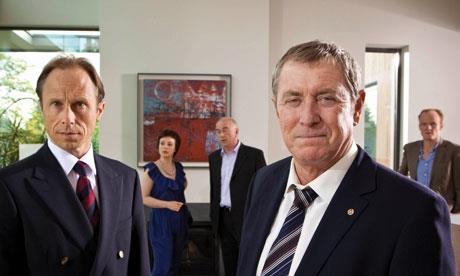 “The big question, however, is whether the format will survive the passing of its greatest asset. Inspector Morse managed it with the inspired casting of Laurence Fox in Lewis, but in casting Neil Dudgeon as Barnaby’s replacement, ITV seems to have taken the safe continuity option over vigorous reinvention. But then what do expect of M&S slacks?”
Gerard Gilbert, The Independent

“Detective jobs tend to go to people called Barnaby. Handing over to his cousin John on his final Midsomer Murders, Tom Barnaby gave a leaving speech so banal (“Finally to Joyce and Cully, thank you for your unfailing love and support”) I wondered if John Nettles was going to fall asleep delivering it.”
Andrew Billen, The Times

“DCI Barnaby was no more gripping a character at the end than he’d been in the middle or anywhere else.”
Matt Baylis, The Express

The Secret Life of Waves, BBC4

“Very unassuming it was, but utterly brilliant. David Malone was enthusiastic without being ENTHUSIASTIC, and was so obviously engaged in his subject that you felt you were learning alongside him. And what an unexpectedly fascinating subject.”
Gerard Gilbert, The Independent

Beauty and the Beast:  The Ugly Face of Prejudice, Channel 4

“It wasn’t quite as bad as it sounds, thanks to Leo’s generous spirit and the fact that Yasmin was a lot more charming and less vacuous than her opening words (“There’s not really any excuse not to be glamorous. Unless it’s a life-or-death situation. Cheryl Cole got malaria. That was a good excuse.”) promised.”
Lucy Mangan, The Guardian

“In a show all about questioning our first impressions Yasmin proved a perfect example because what seemed like vanity was actually a cloak of self-loathing.”
Matt Baylis, The Express

Who Gets the Best Jobs?, BBC2

“Journalist Richard Bilton asked the eponymous question last night, and the short answer appears to be: all those people who Andrew Neil spoke to in last week’s Posh and Posher.”
Lucy Mangan, The Guardian

“This was a companion piece to Andrew Neil’s more flamboyant Posh and Posher last week, in which he bewailed the narrowing of the political cast. Unlike him, Bilton skipped past the decline of the grammar school as a cause of the end of social mobility.”
Andrew Billen, The Times

“It continued in its steadfast tradition of perfect soapy serviceability.”
Lucy Mangan, The Guardian