“Like the sausages, it left you hungry for more.” Read on for the verdict on last night’s TV. 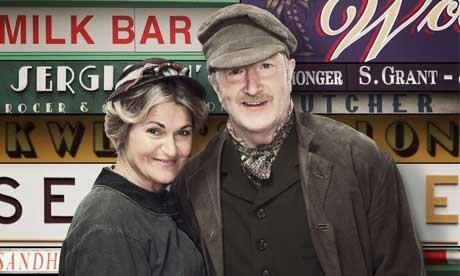 “It is an enjoyable enough programme but every scene is a myriad of missed opportunities. It could have come lightly trailing clouds of social and economic history, but settled for simple, albeit charming, sights of pease pudding being made, eggs being bagged and candles dipped. Like the sausages, it left you hungry for more.”
Lucy Mangan, The Guardian

“I suspect that its contribution to the revitalisation of Shepton Mallet will be minimal, roughly the equivalent of running 100 volts through a dead frog’s leg and getting it to twitch fitfully – but as an entry-level history lesson it’s quite fun.”
Tom Sutcliffe, The Independent

“For the most part it was a rather interesting exercise…[but] however much history was chucked at us it always seemed a little flawed in its claim to be doing some sort of public service.”
Matt Baylis, Daily Express

“It was driving at something, but I was not sure what. A fun ten minutes on The One Show was stretched into an undemanding and not very illuminating hour, short even on tears and tantrums.”
Andrew Billen, The Times

“It’s like being ushered into the private members’ area of eBay…Kirstie, sometimes there are no words to express how much I love you and whatever wonderful, wonderful world it is that you live in.”
Lucy Mangan, The Guardian

TAKING THE KEYS AWAY, BBC1

“The documentary was a portent of the TV of the future in which the dilemmas of old age become increasingly discussed.”
Andrew Billen, The Times