“It is quite possible for the entire 30-minute format to zoom by while one sits in a state of permanent bafflement.” Read on for the verdict on last night’s TV. 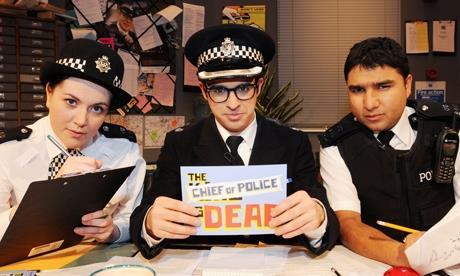 THE KING IS DEAD, BBC3

“New comedy quiz shows always make me nervous. Principally because they are rarely funny…If there were any moments of comedy, I managed to miss them. I could say it was a show aimed at 14-year-old boys. But my 14-year-old son came in and watched with me for 10 minutes before saying: “Jesus, Dad. You don’t half have to watch some shite.”
John Crace, The Guardian

“It is quite possible for the entire 30-minute format to zoom by while one sits in a state of permanent bafflement… Unlike most make-a-fool-of-the-famous-person shows, it is virtually impossible to come off looking good…Unfortunately, there was not a nail-biting, amusing or revealing moment in it…Surely it can’t last.”
Alice-Azania Jarvis, The Independent

“This isn’t just a one-off it’s a series, a series that could be put across in an entertaining and effective fashion in about half-an-hour.”
Matt Baylis, Daily Express

“If the programme really wanted to explain the reasons for the absence of a trial, it could have gone a great deal deeper into the complex diplomatic and trade links between Libya and the UK. Still, I guess that doesn’t count as Real Crime.”
John Crace, The Guardian

“[Dr Alice Roberts] revealed rather more about the dark ages than Mark Austin [in Real Crime] managed to about an event that happened 1,600 years later.”
John Crace, The Guardian