“The Da Vinci Code style hyperbole was matched only by the inanity of the presentation style.” Read on for the verdict on last night’s TV. 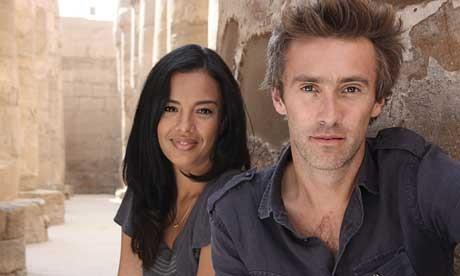 “This was truly mind-boggling stuff, and I could only give thanks that Tony Robinson hadn’t been drafted in as presenter, because we have a fragile vase in our living-room that might not have stood up to his excitable high-pitched shouting.”
Brian Viner, The Independent

“It was proof that the most exciting subjects need a bit of a nip and tuck if they’re going to work on telly.”
Matt Baylis, The  Express

“The Da Vinci Code style hyperbole was matched only by the inanity of the presentation style, which consisted mostly of a series of statements of the bleeding obvious delivered with the breathlessness of a teenage girl finally getting to the front of the queue at Abercrombie & Fitch.”
Sarah Vine, The Times

“It is as much a travelogue as a cookery show, not that there was too much in last night’s programme to make me want to check airfares to Bangkok, apart from the obvious attraction of a Thai boxing evening with drinks served by ladyboys, who suddenly broke into their own version of “Y.M.C.A.”.
Brian Viner, The Independent

“The premise that, after a week, he had a Thai food cook-off with a Thai chef was like Faking It, but without the suspense. He is, after all, already a chef. I’d much rather see him training sheep dogs. Failing better.”
Zoe Williams, The Guardian

Queen – Days of Our Lives, BBC2

“It’s not often that the story of a massively successful rock band is told with next to no anecdotes about terrible clashes of ego and terminal fallings-out, and yet this was fascinating even without them, thanks largely to Taylor and the ever-urbane May, a living contradiction of the old adage that a man can’t have big, big hair and be considered suave.”
Brian Viner, The Independent

“The programme’s priorities – essentially biographical, with a side order of “what is evil?”, unanswered, of course – seemed a bit peripheral to the horrors it presented.”
Zoe Williams, The Guardian

“Its duration was to some extent justified by the weight of the subject but for me its main message was expressed in a few still shots of no more than a second apiece.”
Matt Baylis, The Express

All Watched Over by Machines of Loving Grace, BBC2

“Curtis may be a brilliant film-maker, but he is also something of a conspiracy theorist. Not that such a thing detracts from the enjoyment of this series. If you like Chris Morris and Pyschoville you’ll love this.”
Sarah Vine, The Times