“There are times when one wishes that Louis Theroux would stop going to difficult places.” Read on for the verdict on last night’s TV. 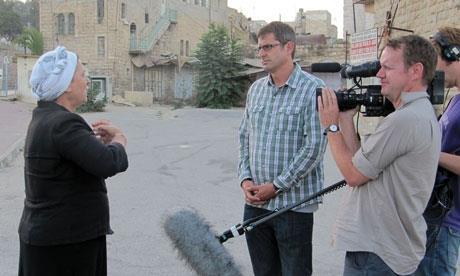 “In a way it was all about being bad neighbours – almost everyone he interviewed had long since divested themselves of any responsibility for what happens to those on the other side.”
Tim Dowling, The Guardian

“There are times when one wishes that Louis Theroux would stop going to difficult places and go back to meeting difficult celebrities, but his subject is always the same thing: extremity.”
Andrew Billen, The Times

“It was never very hard to see what was coming next, and it was more than a little silly, but Marchlands was fun. Fun in a guilty, implausible sort of way.”
Alice Azania-Jarvis, The Independent

“At the start we swapped eras so often, it was hard to keep track, so one was grateful for period details: in 1968 people smoke; in 1987 they watch Crossroads; in 2010 they are irritating.”
Tim Dowling, The Guardian

“The most ludicrous bit was when, continuing the water theme, Kingston’s washing machine became haunted and started going bump in the day.”
Andrew Billen, The Times

“The set-up, flashing back and forth between stories and decades is a bit bewildering at first, as if you have sat on the remote control and are inadvertently switching channels every few minutes. Once you get used to that you can sit back and be thoroughly spooked.”
Matt Baylis, The Express

“It didn’t offer us anything particularly new, but it was fascinating nonetheless.”
Alice Azania-Jarvis, The Independent

“Linney is great, but her character threatens to relegate Nurse Jackie down a division to merely irritating. If you thought a comedy about cancer might be hard to get right, well spotted.”
Andrew Billen, the Times