“I am happy to suspend as much disbelief as necessary, simply because the rewards are so great.” Read on for the verdict on last night’s TV. 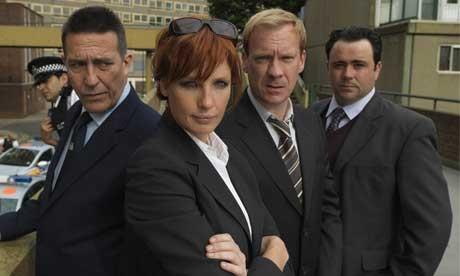 “Unlikely to live long enough in the mind to transcend its two generic titles. The preposterous genre clichés piled up faster than the bodies..I’d stopped paying much attention to the plot by the end of the hour, once I realised I’d have to tune in to two more episodes.”
Tim Walker, The Independent

“[It] looks like a superior beast…with the casting adding an extra touch of pizzazz.”
Matt Baylis, Daily Express

“It’s much grittier than Silent Witness – all council estate crack dens and handheld cameras – but it works to much the same formula…It was, of course, a load of old doggy, with all the characters being just that bit too hard, that bit too cool and that bit too enigmatic. But it is great old doggy, for which I am happy to suspend as much disbelief as necessary, simply because the rewards are so great.”
John Crace, The Guardian

“[It] works well as an ensemble piece and over the years there has been some diverting inter-character byplay, but its real strength lies in the quality of its storylines. Best of all, though, I still didn’t really have much of a clue how the six murders were related by the time the hour was up.”
John Crace, The Guardian

THE BEAR FAMILY AND ME, BBC2

“Buchanan’s first clammy-palmed encounter with a bear, as he followed it into the woods alone with nothing but a beeping radio transmitter to discern its whereabouts, made for genuinely tense television.”
Tim Walker, The Independent

“It’s more about [Buchanan] than the bears, about him conquering his fears and capturing his footage. But he even complained about that. There was far too much footage of Buchanan and not enough of the bears…it would be best if he stayed behind his camera and let his subjects be the teal stars of his films.”
Mike Mulvihill, The Times