“There were various dull leitmotifs running throughout the show.” Read on for the verdict on last night’s TV. 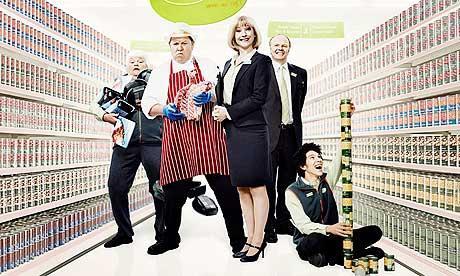 “It’s not surprising to find out that Trollied is produced by Ash Atalla, who made his name with The Office. They’re the same that way: places where we spend too much time, places we don’t even notice any more.”
Alice Azania-Jarvis, The Independent

“The dialogue was weak and frequently vulgar, there were various dull leitmotifs running throughout the show, including a gag about a hat shop closing down and frankly it was difficult to believe a word of it.”
Virginia Blackburn, The Express

“The show certainly needs running in. It is weakened by a lack of thorough plot. The plot on “interim-ing” was flogged to death. But there is a confidence to the piece announced by its opening, which takes the form of an advert in which Valco’s staff perform chuckling idealised versions of themselves.”
Andrew Billen, The Times

“I’m afraid it didn’t really grow on me for its second episode, and its obvious antecedents – it’s trying so hard to be The Office that it has Ricky Gervais’s face tattooed, metaphorically, across its own – grated a bit.”
Zoe Williams, The Guardian

“How much influence do the residents really have over local budgets? In truth, Crane seemed less enamoured with this town [Scarborough] than with Ludlow and there were fewer claims made on its behalf.”
Alice Azania-Jarvis, The Independent

“A bleary mix of the profane and the provocative: Women’s Institute members visiting a sex shop, adverts for Gaytime ice lollies, repeated appearances by a sweaty telesales presenter flogging medieval weapons. It’s like an upside down Harry Hill: the presenter’s not terribly funny, but the clips, in the most juvenile of ways, are.”
Alice Azania-Jarvis, The Independent

“There were more twists than a corkscrew as the plot worked itself out.”
Virginia Blackburn, The Express

“It turned out last night that lovem not greed, was the motive for a murder, and this was a lesson that had to be taught to our hero Jack by an enemy.”
Andrew Billen, The Times

“Strangely, it restores your faith in human nature. Some people out there really are so trusting.”
Virginia Blackburn, The Express

“As our host reaches the crescendo of his journey, which principally means eating more lentils and more cured pork products. He bursts across the countryside, saying things like “I love goat!” and “the fields are on fire with chillis”. He’s like Julie Andrews with a paunch.”
Zoe Williams, The Guardian