“Darkly comic and richly gruesome, it is ER on amphetamines.” Read on for the verdict on last night’s TV. 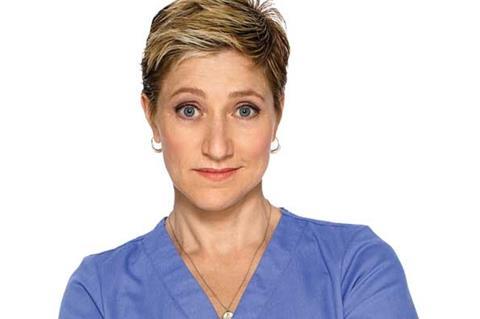 “Yet another US import to force us to re-examine the whiskery old notion that Britain is the rightful home of original TV drama. Nurse Jackie is a product of America’s medical-drama lineage from General Hospital to ER and even Scrubs: darkly comic and richly gruesome, it is ER on amphetamines.”
Brian Vilner, The Independent

“Edie Falco’s Jackie is sassy, stroppy and talks either in one-liners or monologues reinforced with obvious literary references. But what I really wish is that it gets funny.”
Andrew Billen, The Times

“A rather odd little programme in which the actor Richard E. Grant, himself a committed diarist, looked into the lives of other famous diarists. He’s a fine actor, but as himself he seems mannered and just a little obsequious.”
Brian Vilner, The Independent

“Most touching was Joss Ackland. He never asked to see his wife’s diaries but when he edited them after she died of motor neurone disease, he found them glowing with tenderness and passion.”
Nancy Banks-Smith, The Guardian

Above Suspicion: The Red Dahlia, ITV1

“This Above Suspicion is an improvement on the last, featuring less wooden acting, fewer clichés, some credibly drawn minor characters and a plot that, I admit, kept on gripping.”
Andrew Billen, The Times

“Based on one of Lynda La Plante’s novels… I was tickled to see that the prime suspect in this gruesome murder was a Sunday Telegraph journalist.”
Nancy Banks-Smith, The Guardian

“Hustle’s popularity is a national embarrassment. The plot - about ripping off a Fred Goodwin-alike disgraced banker - was puerile.”
Andrew Billen, The Times

The Mystery of the Nevada Triangle, C4

“There was an old-fashioned feel about this documentary in that it felt like the sort of air-crash-mystery-conspiracy programme that used to be on Channel 4 before Five came into existence. Somewhere this programme had got its co-ordinates wrong, and ended up landing on the wrong channel.”
Matt Baylis, Daily Express

“A sort of super-sized Seven Up, this programme promises to follow a group of obese children into adulthood. It’s hard to imagine who’ll be tuning in regularly to catch it.”
Matt Baylis, Daily Express