“The approach here is to promise to tell us something fascinating before cutting to something utterly unrelated.” Read on for the verdict on last night’s TV. 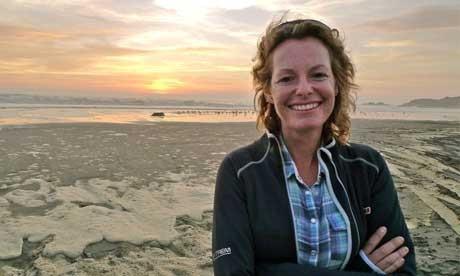 “In olden times, Raymond Baxter would have explained the coriolis effect in a studio with a globe and string; today we need two presenters racking up air miles, sumptuous camerawork and state-of-the-art CGI to explain basic features of our home planet at primary-school levels.”
Stuart Jeffries, The Guardian

“The approach here is to promise to tell us something fascinating before cutting to something utterly unrelated that eventually leads back to the original promised information. All this serves only to push the viewer to the outer limits.”
Matt Baylis, The Express

“It was packed with content: jet streams, climate cells, the coriolois effect, tides and trade winds. The presenters trekked, and parachuted and dived to make it all come alive. But I come from a middle-class home walled with novels, and, I fear, my attention wandered.”
Andrew Billen

“You can call me paranoid if you want, and just join the welcome parade. But I’m still convinced that this could go either way. And since that means I have to carry on watching, you might say that Homeland’s won anyway.”
Tom Sutcliffe, The Independent

“Only one thing is certain: Claire Danes, ceaselessly unsmiling, is going to stick to her task of nailing this case, whatever the Langley suits say.”
Stuart Jeffries, The Guardian

“Bright grammar school boys from ordinary backgrounds and working-class rock stars started to make the running as family connections became less important in defining who you were than the music and books and films you liked. That was Bragg’s thesis, anyway, and he backed up with good contributors and lots of lovely archive film.”
Tom Sutcliffe, The Independent

“Barely a link was delivered without a chuckle, his sunny disposition suggesting not only his satisfaction at being on the winning side of a cultural revolution but also whatever injustices and deprivations can be blamed on the British class system, it has, at least, always been a defining source of British comedy.”
Andrew Billen, The Times

“I’m not sure though I minded the odd wonky message so much as I minded the whole sub-Mills & Boon tone of the episode.“
Matt Baylis, The Express