“It was all a bit Doctor Who metaplotty.” Read on for the verdict on last night’s TV. 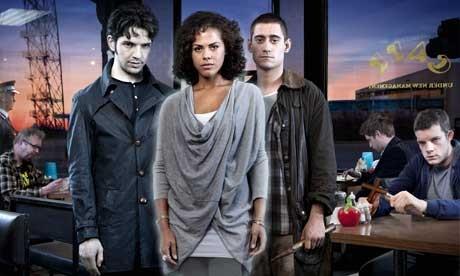 “I have always liked Being Human’s self-confidence. Yesterday, however, I wondered if the creator, Toby Whithouse, was not in danger of over compensating for his cast changes… in a crunching gear shift, the show opened 25 years on in a future where vampires had taken over the planet, and closed with the promise that George’s baby would be humanity’s saviour. It was all a bit Doctor Who metaplotty for me.”
Andrew Billen, The Times

“Toby Whitehouse is throwing new ideas at it, maybe too many – there’s so much going on, it feels like it needs to calm down and settle, bed in as a team.”
Sam Wollaston, The Guardian

“It wasn’t just interested in guying the styles of early British cinema. It wanted to have fun with the reverential arts documentary too, and it did it very nicely. It wasn’t perfect… But the jokes and the imitations were good enough and steady enough that it didn’t really matter.”
Tom Sutcliffe, The Independent

“This kind of spoof documentary is rarely funny. What is being sent up here – a particularly kind of reverential documentary – isn’t enough of a phenomenon for most people to merit the ridicule… I’m afraid it left me cold.”
Sam Wollaston, The Guardian

“There may be viewers out there who can look at a Lancaster bomber in the air without getting a lump in their throat at what it represents – the courage and horror both – but I’m not one of them.”
Tom Sutcliffe, The Independent

“Engaging on the personal and historical level, this was a programme well worth a look.,”
Matt Baylis, Daily Express

“There are moments when you really do have to look away…but there are plenty more when you are simply enjoyable hooked.”
Matt Baylis, Daily Express

TOUGHEST PLACE TO BE A…FISHERMAN, BBC2

“Maybe it’s a little simplistic. It would probably be more interesting if Andy had ended up in a pot over the fire. Or copping off with a local lady. Instead it’s reassuring, uplifting even, nice.”
Sam Wollaston, The Guardian