“Some of these BBC4 documentaries can be a bit on the flimsy side.” Read on for more verdicts on last night’s TV. 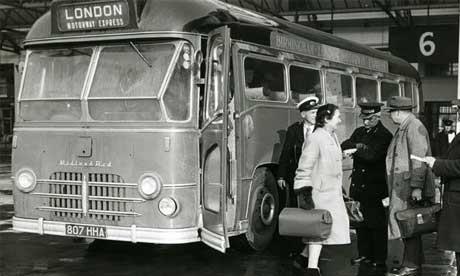 “There was social history (the Holiday with Pay Act of 1937 increased the demand for coach services), intriguing detail (some drivers would chalk a roulette wheel onto one tyre and run a modest sweepstake on which number would come up at the next stop) and great waves of misty-eyed recollection.”
Tom Sutcliffe, The Independent

“Between the heyday of rail and the dawn of cheap airfares, encouraged by a train strike in 1919, borne on the wheels of ex-surplus army lorries bought by Tommies with their discharge settlements, trundled The Golden Age of Coach Travel.”
Andrew Billen, The Times

“Some of these BBC4 documentaries can be a bit on the flimsy side… This Timeshift one worked, though, not least because of the anecdotes it contained.”
Matt Baylis, The Express

“Britain’s Fattest Man was, I guess, water-cooler television, just the kind of thing to provoke fascinated “Did you see?” inquiries the following day.”
Tom Sutcliffe, The Independent

“After a sylvan car chase that reminded me of the golden age of ITC thrillers, and a highly unlikely scene in which Mr Big conned his way into the copshop, it ended with pneumatic DI Travis telling erratic DCS Langton that she loved him.”
Andrew Billen, The Times

“A “comedy roast” is a bit like a best man’s speech. Someone stands up and rips the subject to shreds; picks on all their faults and bad habits; rifles through their past, unearthing long- forgotten, dark secrets; and through their cupboard, tossing out the skeletons.”
Sam Wollaston, The Guardian

“It’s just a carnival of vacuity, a shimmering mirage, not just a victory of style over substance, but a total hammering. It’s presided over by a man who becomes more intolerable with every flounce. And yet once again it is inexplicably, spellbindingly fascinating.”
Sam Wollaston, The Guardian