“Fun, fast, nice to look at – and not just Jackson’s torso but the Scottish backdrop too.” Read on for the verdict on the weekend’s TV. 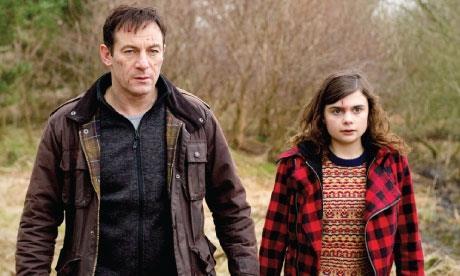 “Case Histories will be watched with some vigilance I expect – a lot of people having already formed a strong attachment to the Kate Atkinson books on which it is based, and a lot of female readers having formed an attachment to her hero, Jackson. I can’t really say whether Jason Isaacs is going to satisfactorily flesh out that literary infatuation, but, barring his wife, he certainly seems to hit the spot for the women within the drama.”
Tom Sutcliffe, The Independent

“The casting… is strong, Edinburgh looks magnificent, and the dialogue amuses. There were, however, too many flashbacks.”
Andrew Billen, The Times

“It is, if you like, another two-part murder mystery job featuring a picturesque location and an improbably intelligent investigator. It’s also brilliant, clever, watchable stuff.”
Matt Baylis, The Express

Fun, fast, nice to look at – and not just Jackson’s torso but the Scottish backdrop too. Phwoar, Edinburgh. Case Histories is not too demanding, even if I’m not sure what exactly’s going on – to the right of Midsomer and Lewis, a little to the left of Wallander, on a low-to highbrow TV detective scale.
Sam Wollaston, The Guardian

“The show’s intriguing and unique mix of British social history, archaeology and natures seems by now to have been watered down to the point where it’s weaker than the worst cup of tea on any seaside pier anywhere, even across the Channel in Belgium.”
Matt Baylis, The Express

“So now we’re travelling down the Thames estuary. Does that count, as coast? Or should it be called Bank? And then we go to bloody Belgium! Côte, then.”
Sam Wollaston, The Guardian

“What’s been best about The Hotel is just such human muddle, occasionally bad-tempered, or sorrowing or rueful (as when Wayne recalls his broken marriage), but mostly just human and full of a struggle to be slightly better than we can manage by instinct.”
Tom Sutcliffe, The Independent

“Whereas Moffat’s predecessor, Russell T. Davies bigged up the Doctor as a Christ-like saviour, Moffat suggests that he is nearer the Jesus of the Book of Revelation, a militant who rules through fear. Yet the dialogue remained nimble and funny and dancincly rendered by the highly impressive ensemble.”
Andrew Billen, The Times