“What lifts Coppers way, way above the usual run of reality documentaries is the amount of trust involved.” Read on for the verdict on last night’s TV. 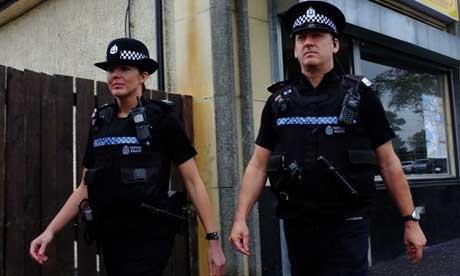 “Indisputably tragic then… though in a way that serving police officers couldn’t take a lot of account of if they were going to continue to do their job. And that’s another clue to the watchability of Coppers, which is that comedy is what you pull on over tragedy if you want to insulate yourself from its effects.”
Tom Sutcliffe, The Independent

“What lifts Coppers way, way above the usual run of reality documentaries is the amount of trust involved. It evidently exists between the subjects and the production teams, resulting in a rare degree of honesty from the former (“Shooting guns is great,” says Jimbo, matter-of-factly. “It does give you that buzz … It’s the Gucci end of the job”) that is particularly welcome, given the police tendency to speak only in formally-approved circumlocutions about apprehending Caucasian males seen proceeding vehicularly away from the scene of a recent pugilistic interfacing situation outside a house of public alcohol vendorisation whenever there’s a lens or microphone within 50 feet.”
Lucy Mangan, The Guardian

“Mostly it’s grievously dull, and marked by an odd kind of sexism that is not nearly far enough from the saloon-bar jauntiness that greeted a dolly bird demonstrating the do-it-yourself garage in another Sixties clip (“She’s no grease monkey!”).”
Tom Sutcliffe, The Independent

“With its simple, practical advice about changing tap washers and topping up engine oil, it is revealing mothering we wouldn’t all have known 40 years ago.”
Matt Baylis, The Express

“The programme, put together and presented (by Declan Lawn) with Panorama’s customary precision and lack of sensationalism, was a bleak half-hour about some people’s deployment of the internet to make life utterly – and in some cases unbearably – miserable; a portrait of cyber-succubi drawing their energy and pleasure from the knowledge that they are inducing despair in others.”
Lucy Mangan, The Guardian

“This series wisely sidesteps those issues to look at the lives of the men and women on the ground. Through their eyes it gives us a picture as true as any civilian viewer could ever hope to have of war.”
Matt Baylis, The Express

“It provided a public service of sorts; as if it has been designed to wean kids on to the diet of awful TV they’ll have to face as adults. Among the saving graces were the animation, the odd blast of Auto-Tune on the Jedward-sung theme tune… and the message that’s it ok to be talent-light, as long as you’re nice.”
Alex Hardy, The Times