“This is not just the story of a tragic sinking”. Read on for the verdict on last night’s TV. 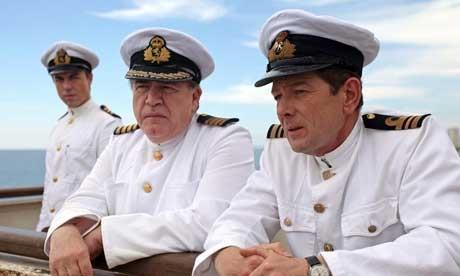 The Sinking of the Laconia, BBC2

“The story of the Laconia, like Titanic’s and Mutineer’s, is basically true and it has plainly energised Bleasdale’s imagination.”
Andrew Billen, The Times

“This is not just the story of a tragic sinking: it’s that plus an amazing rescue that raised questions about humanity and morality and had implications for how the remainder of the war at sea was fought.”
Sam Wollaston, The Guardian

“Clunes is irrepressibly likable, burbling amiably to everyone he meets. The point was for him to swim with the mantas during feeding, though it was harder than he anticipated.”
Alice-Azania Jarvis, The Independent

“Martin Clunes is one of those people, like Robson Green, who appears to be making the transition from actor to general television tart.”
Sam Wollaston, The Guardian

The Brain: A Secret History, BBC4

“Michael Moseley’s new series manages to tiptoe away from the well-trodden stuff into the realm of the surprising.”
Matt Baylis, The Express