“Sooke’s film was a generally engaging affair, presented by someone with a genuine ease in front of the camera.” Read on for the verdict on last night’s TV. 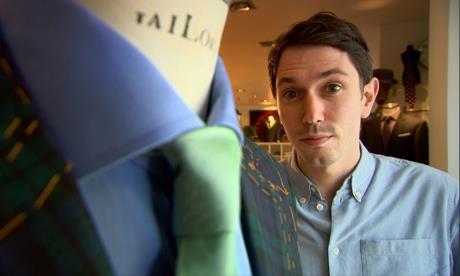 “Ignorance can be a good place to start, and so it proved.”
Andrew Billen, The Times

“Alastair Sooke tackled the slobbification of that phenomenon that was once a byword for sartorial snazziness, the British male.”
Stuart Jeffries, The Guardian

“In The Perfect Suit self-confessed suit avoider Alistair Sooke delved into the history and meaning of his peculiarly British Institution. Along the way as well as discovering that the suit started out as a fashion rebellion he realised he likes suits. He does look good in them but then almost everyone does.”
Matt Baylis, The Express

“Sooke’s film was a generally engaging affair, presented by someone with a genuine ease in front of the camera. And this was explicitly a beginner’s guide to the subject, offered up by someone who only bought his first suit when he was getting married and didn’t seem to have worn it since.”
Tom Sutcliffe, The Independent

“The average time children interact with their parents is, apparently, 49 minutes a day. Could the attention that is currently deficit be ours?”
Andrew Billen, The Times

“The title sounds like something aimed at a transatlantic market and so too does the main element, making it different from her previous incarnation as Supernanny.”
Matt Baylis, The Express

“Start with that many clichés, I thought, and you’d better deliver – but she did… she came across as both likeable and admirable, committed enough to the country she’d reported on for many years.”
Tom Sutcliffe, The Independent