“The whole thing lacked the exuberance of the original.” Read on for the verdict on last night’s TV. 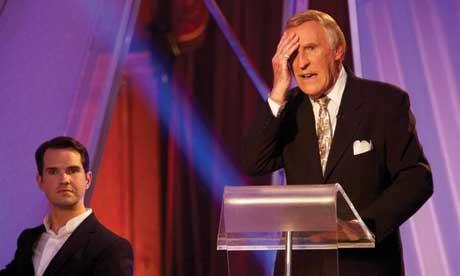 “The gags about Bruce were fairly predictable, even if they were nicely turned now and then.”
Tom Sutcliffe, The Independent

“Jonathan Ross said ‘fuck’ a couple of times, but the whole thing lacked the exuberance of the original.”
Tim Dowling, The Guardian

“Perhaps for the first time on British television the showbiz mafia came not to praise but to bury on of its godfathers. Still, as with the best man’s speech, the tone is hard to get right.”
Andrew Billen, The Times

“Bell Burnell is utterly without the forced enthusiasm of the modern scientist-presenter, and yet she is remarkably good at explaining her job simply and concisely.”
Tim Dowling, The Guardian

“There was a suggestion that the patriarchal structure of research had led her supervisor, Dr Tony Hewish, to steal ‘her’ Nobel Prize for the discovery, but this beautifully clear programme was so much more than that: a brief history of the universe, an essay in scientific methodology and an argument, from a Quaker, against fundamentalism in science.”
Andrew Billen, The Times

“It might as well have been titled ‘We Saved a Little Girl, So There!’ And naturally, it was as compelling as all accounts of childhood suffering are—a plot line you can’t turn away from because you hope so fervently for a happy ending.”
Tom Sutcliffe, The Independent