“The whole thing is deeply uncomfortable.” Read on for the verdict on last night’s TV. 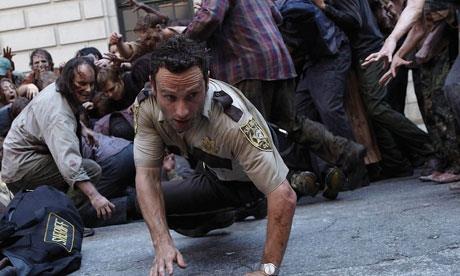 “After a shocking opening…it was the living, not the invading undead who mattered. The whole thing is deeply uncomfortable.”
Andrew Billen, The Times

“Downton Abbey will return next year. Because, while I normally dislike lavish period drama as much as the next man does, I’m rather ashamed to admit that I’ve thoroughly enjoyed this one…But what has really kept us glued to our Sunday night tellies is the whole upstairs-downstairs soap opera. …It’s funny too – particularly this last episode.”
Sam Wollaston, The Guardian

“It is Attenborough’s enthusiasm, matched by his intellectual clarity and journalistic turn of phrase, that makes the story live.”
Andrew Billen, The Times

“Built on the premise that the things people briefly find interesting during a chat in the pub are worth running with and turning into several minutes of publicly funded television…this feels like an imitator or hanger-on straining to justify itself and not succeeding.”
Matt Baylis, Daily Express

THE ARMSTRONG AND MILLER SHOW, BBC1

“Seems to have built on one idea. You take some posh people and put them in a downmarket situation…then you take some downmarket people and duly stick them in a posh setting. ..these comics are a hell of a lot funnier when they turn to less trodden ground.”
Matt Baylis, Daily Express