“One big conference call of half-arsed prime time.” Read on for the full verdict on last night’s TV. 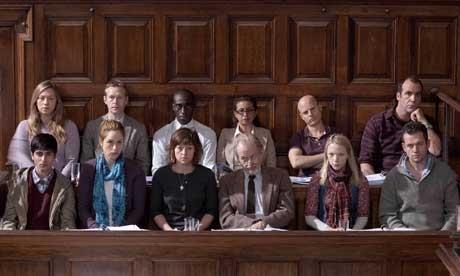 “The central strength is the way in which [Peter] Morgan pulls us into the juror’s worlds with the neatest of words… There’s so much left to trickle out as The Jury continues each night this week. They promise to be fascinating companions.”
Alex Hardy, The Times

“Morgan has a wonderful ear for formal intercourse and political devilment, but the dialogue he accords to ordinary families, trying their best in an imperfect world, sounds like an Oxo advert. The odd line of interesting dialogue… doesn’t alter the overwhelming impression that this was phoned in, by writer and director alike. One big conference call of half-arsed prime time.”
Zoe Williams, The Guardian

“The thing is bristling with drama and intrigue but while that’s exactly what we want it might be a case if too much too soon…[It] looks good. Blooming brilliant in fact. So why do we have to gobble the whole thing down in a hurry? What would be wrong with an audience tuning in once a week for five delectably complicated instalments?”
Matt Baylis, Daily Express

“Julie Walters overacts wildly in Peter Morgan’s latest television drama. She’s hammy, melodramatic, and goes so far over the top at times that it’s a wonder she doesn’t black out from oxygen deprivation…It’s started well, and it would be premature to declare a mistrial at this stage.”
Tom Sutcliffe, The Independent