“She is BBC3’s answer to Ross Kemp.” Read on for the verdict on last night’s TV. 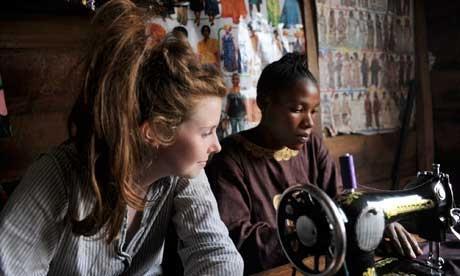 “Stacey Dooley is a TV phenomenon a non-journalist who produces better journalism than many journalists. She is BBC3’s answer to Ross Kemp…Their strength is the remarkable, indeed surprising empathy they have with the subjects of their films. [It] worked because Dooley got to the right interviewees, asked the right questions and drew what seemed to be the right conclusions.”
Andrew Billen, The Times

“Dooley isn’t exactly Orla Guerin… What Stacey does very well is the human angle, and it’s her ordinariness that makes her a natural in front of the camera… But what really made this documentary so good is the fact that it was made at all. When was the last time you heard a western politician talking about the civil war in the DRC, or saw it featured on a news bulletin?”
John Crace, The Guardian

“Occasionally, her dizzy presentation grated. But then this is BBC3: the audience is younger, their attention spans shorter. And anyway, Stacey’s warmth, emotion and, yes, big-heartedness more than compensated.”
Alice-Azania Jarvis, The Independent

“When you’ve seen Stacey in floods of tears over some benighted African’s life story, you’ve seen it as many times as you need to…The blame lies higher up with those who book, film and edit her: those who raised and trained on a diet of in-yer-face, let-it-all-hang-out reality TV, think raw emotions count for more than reasoned argument.”
Matt Baylis, Daily Express

“Unlike The Office and Extras, whose characters have recognisable personalities and depth, those in Phoneshop – despite some decent performances – never rise above caricature. There are a few bright moments…but not enough. It’s probably worth giving it another chance next week, but it will need to pick up to avoid becoming another high-street closure.”
John Crace, The Guardian

“It is not exactly badly written…But the scripts would have to be much funnier to make up for their cynicism. And call me heartless, but the cast is a charisma-free zone.”
Andrew Billen, The Times

“They are all stereotypes, but they are engaging ones, the writing is fresh and sharp – and Ty Burrell as Phil is comedy gold.”
John Crace, The Guardian