“Obama had to laugh casually as jokes were made about Osama hiding in the Hindu Kush.” Read on for the verdict on last night’s TV. 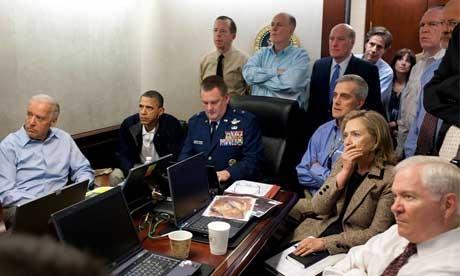 “It reminded you of what nerve he’d [Obama] shown while the coin was in the air. Attending the White House Correspondents dinner that night, Obama had to laugh casually as jokes were made about Osama hiding in the Hindu Kush. And next day he had to watch as a Black Hawk went down and it looked as if historical fiasco was about to repeat itself.”
Tom Sutcliffe, The Independent

“There was a lot more to offer than just bare facts. As is often the case with major events the trivia provided the most interesting aspects.”
Matt Baylis, The Express

Horizon: Are You Good or Evil?, BBC2

“If you’re interested in the subject you might do better to read Jon Ronson’s book The Psychopath Test, which is a bit more questioning about the science involved and definitely has better jokes.”
Tom Sutcliffe, The Independent

“It made a good case that there is a “warrior gene” that makes some of us less inhibited about working with others.!
Andrew Billen, The Times

“A California neuroscientist called Jim Fallon found he could identify killers just from their brain scans – they had the same abnormalities, had a signature brain profile; it seemed there was a biological basis for the urge to kill. And a genetic  one.”
Sam Wollaston, The Guardian