“It’s so low-key it’s almost not there, but what is there is great.” Read on for the verdict on last night’s TV. 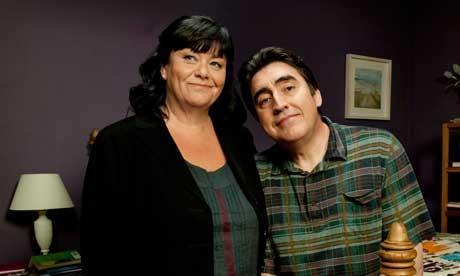 Roger & Val Have Just Got In, BBC2

“Given the way the characters regularly confuse the banal with the earth-shattering it might just be a wilting plant, but it would be worth watching next week either way to find out. It’s so low-key it’s almost not there, but what is there is great.”
Tom Sutcliffe, The Independent

“It’s a beautifully observed portrait of everyday life and a relationship, they say, poignant and touching. I could switch off the telly and look in the living room mirror for that, I say; I want a bit more from a drama; it’s boring.”
Sam Wollaston, The Guardian

“The format presupposes some degree of curiosity about what lies behind the public facade of Kevin Bridges, which was a bit awkward in my case since I’d never heard of him at all. Frankly, pretty much anything I learned was going to be a revelation.”
Tom Sutcliffe, The Independent

“The story is that Kevin Bridges is an above average stand-up and what we want to see is him standing up and delivering, which he generally does.”
Andrew Billen, The Times

“According to this witty, lively documentary, French kings were deemed to lack gumption if they didn’t take a mistress or three.”
Matt Baylis, The Express

“At times Super Smart Animals does feel a bit like a trawl around YouTube (they forgot the surfing sheep!); that or a children’s science programme – it’s presented by Bang Goes the Theory’s Liz Bonnin, who’s very bouncy and very bubbly. “
Sam Wollaston, The Guardian