“It’s a fantastically compelling and intricate drama.” Read on for the verdict on the weekend’s TV. 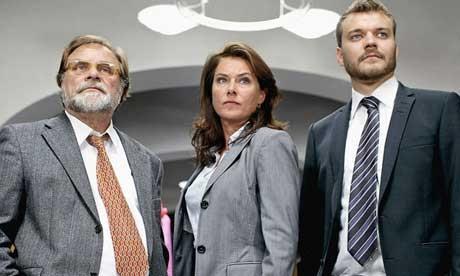 “I’d rather hoped that this account of an idealistic female politician would turn out to be a negligibly niche affair, only for policy wonks and hardcore subtitle enthusiasts, if only because I didn’t know where I’d find 10 free hours to watch it all. But, for all my indifference to the niceties of Danish coalition politics, it turns out to be horribly moreish.”
Tom Sutcliffe, The Independent

“Borgen should appeal to everyone to be honest. It’s a fantastically compelling and intricate drama about politics, gender, change and (mainly) power. With great characters – not just the women but the men too.”
Sam Wollaston, The Guardian

“It is not only a political thriller with integrity but about integrity. It also happens to be frequently funny, although on Saturdays we English speakers got an extra joke after Brigitte’s mouth released a splatter of “pisses”. These were solemnly and surprisingly translated in subtitles as “shit.”
Andrew Billen, The Times

“I enjoyed Steven Moffat’s high octane scattergun opener last week, but it was a bit of a confusing mish-mash. This one, Mark Gatiss’s take on The Hound of the Baskervilles, is better still. He’s taken the most famous of all Holmes stories, and cunningly brought it up to date.”
Sam Wollaston, The Guardian

“After the usual flashily deductive start, this episode was less cerebral than last week’s, which was fine, but not very scary, which wasn’t. In fact the mad scientist/ Porton Down translation of Holmes’s most famous case was a little Avengers for my taste.”
Andrew Billen, The Times

“Deschanel is funny, and there’s something of Lucille Ball in her readiness to clown for the camera. She mugs sweetly, throws her whole body into the character’s eccentricity and – there’s no way round it – often looks like a Lolcats kitten, peering through the character’s heavy-framed glasses with beseeching eyes. And the comedy itself is smart in that machined American way, full of snappy crash-cuts and zippy verbal caricature.”
Tom Sutcliffe, The Independent

“It shouldn’t, seriously shouldn’t, work in any way whatsoever. It does, and it’s funny. They probably sucked overenamelled teeth at the first episode of Friends.”Euan Ferguson, The Observer

“Stella, Ruth Jones’s new comedy for Sky1, is built around a female lead, but in this case it’s written by her as well, with the result that it has a lot more emotional texture to it.”
Tom Sutcliffe, The Independent

“The first series there were ructions of course, burnt toast and ghosts and so on, but hanging over it, like Cumbrian mist, a basic aura of goodwill. We’ve moved to Torquay for the second series that aura sadly seems to have disappeared.”
Matt Baylis, The Express