“I simply couldn’t see what Quentin herself added to the mix.” Read on for the verdict on last night’s TV. 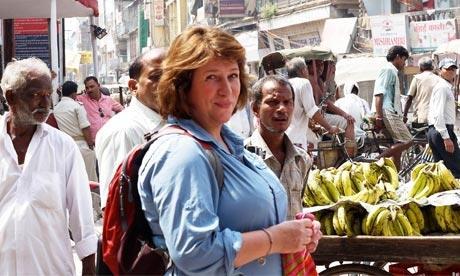 “The problem was that I simply couldn’t see what Quentin herself added to the mix, so found myself picking a fight with nearly everything she said.”
Tom Sutcliffe, The Independent

“It’s all about the past, culture and tradition, colour and spices, just like all the other travelogues have been. Until the end when she goes to a fertility clinic, a place where surrogates have babies for people, often Americans, who can’t have their own.”
Sam Wollaston, The Guardian

“Quentin is a very likeable woman but that is quite different from being a seasoned travel journalist. No cliché was left unturned.”
Virginia BlackBurn, The Express

Agony and Ecstasy: a Year with English National Ballet, BBC4

“It had everything: a martinet choreographer giving his dancers hell, a young star getting his first shot at a leading role and a will-she-won’t-she cliffhanger about who exactly would take to the stage as Odette on the first night.”
Tom Sutcliffe, The Independent

“This is really basically Pineapple Dance Studios for posh people. Just as fascinating too – a rare glimpse into a world that is not only unfamiliar to most of us but also totally baffling.”
Sam Wollaston, The Guardian

Horizon: Predators in Your Backyard, BBC2

“A fascinating documentary about a process called “rewilding”, which means reintroducing species to habitats they once occupied but don’t any more.”
Sam Wollaston, The Guardian

“It made vivid the concept of interdependence and how the removal of one element of the food chain lets rip the law of unintended consequences.”
Andrew Billen, The Times

“Although last night’s episode was not as bad as last week’s mortifyingly pious rape story, it was still as lumpy as cat scat, which featured in an unpleasant plot.”Andrew Billen, The Times

“Henry (Jonathan Sadowski) is a struggling writer heading for penury and has to move back in with father Ed (William Shatner)…  Suffice it to say the team behind this was also responsible for Will and Grace, one of the best sitcoms in years.”
Virginia BlackBurn, The Express