“Part of me felt that we needed to delve deeper into why these irrational beliefs had taken hold.” Read on for the verdict on last night’s TV. 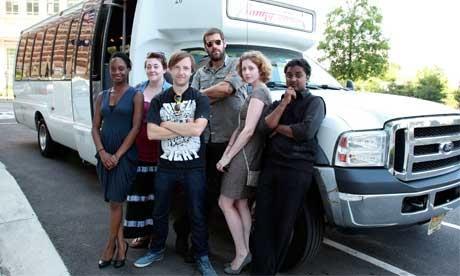 “The resulting programme was actually rather interesting – less for the refutations advanced (which, as we discovered, even novice paranoiacs found it easy to dismiss) than for the opportunity to study at close hand the psychology of the true believers.”
Tom Sutcliffe, The Independent

“Part of me felt that we needed to delve deeper into why these irrational beliefs had taken hold. But Charlie – who, to his underlying credit, was the only one at the end to renounce his views – said it all when he admitted that he had always simply hung out with guys who agreed with him.”
Andrew Billen, The Times

“It crossed the US with a cargo of British 9/11 sceptics, all of who had agreed to have their ideas challenged. That was sort of the deal. In reality the coach contained only two people likely to insist that hot was cold if they had read it on the internet.”
Matt Baylis, The Express

“Both exist in that weird alternative universe where busy young professionals have endless amounts of time to sit around on sofas teasing each other and both of them are marked by that melancholy desperation to be likeable that comes from the American commissioning system, which has an attrition rate worse than the Somme.”
Tom Sutcliffe, The Independent

“The channel stopped showing repeats of Friends on Sunday, and the rush to replace it brought forth two formulaic shows, each featuring three young men and three young women wisecracking in a fashion that made that previous Friends rip-off, How I Met Your Mother, look positively Wildean.”
Kira Cochrane, The Guardian

“There were decent lines on both these samey new US sitcoms plus fast-cutting, pop-culture references and flashbacks. But neither had a stand-out performance to differentiate the cookie cutter cast members from one another or, indeed, the other ensemble.”
Andrew Billen, The Times