Agatha Christie and the Curse of Ishtar; Dial M for Middlesbrough; Shrill; His Dark Materials

“The show had no idea whether it was a crime thriller, parody, steamy romance, sex farce, horror movie or slapstick comedy” 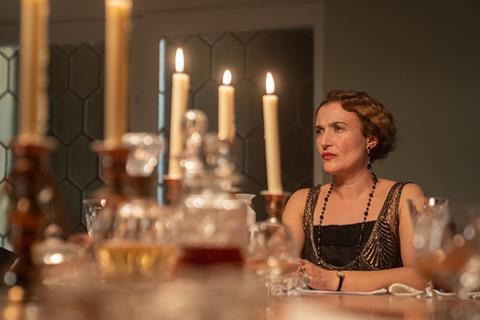 Agatha and the Curse of Ishtar, Channel 5

“This fictionalised tale played fast and loose with history. The script’s swearing and more racy scenes - notably the Carry On-style antics of a sexually voracious ex-pat couple and Christie initiating congress in the catacombs (what would Miss Marple say?) - felt gratuitously crowbarred in to spice things up for contemporary audiences.”
Michael Horgan, The Telegraph

“If you haven’t already watched Agatha and the Curse of Ishtar I’d recommend saving it to use as a little pick-me-up as and when required. Because although this was a pale imitation of an Agatha Christie plot, what it lacked in unexpected twists and depth it made up for in nostalgic comfort-blanketry and good, clean murder.”
Carol Midgely, The Times

“Set on an archaeological dig in Mesopotamia during the Twenties, the walls wobbled in this bargain basement adventure, like a Miss Marple mystery at the Crossroads motel. But the budget wasn’t the worst problem facing Lyndsey Marshal, who played a young Agatha Christie. She had to keep a straight face in a show that had no idea whether it was a crime thriller, parody, steamy romance, sex farce, horror movie or slapstick comedy.”
Christopher Stevens, Daily Mail

“Writer Jason Cook still had a fine ear for a cracking one-liner, especially when talk turned to Terry and Gemma’s wedding plans (“we’re having a gravy fountain instead of chocolate”) and veteran director Ed Bye orchestrated the farce adeptly. Yet I felt that this time the formula was becoming a little… well, formulaic. There was a bit too much reliance on gross-out humour, too.”
Jeff Robson, The i

“Johnny Vegas and Sian Gibson worked gamely for laughs as they investigated a string of murders at the Shady Creek caravan park in Dial M For Middlesbrough. The humour was as broad as Benidorm and, for those who are missing the high jinks at that Spanish holiday resort, it delivered some cheesy chuckles.”
Christopher Stevens, Daily Mail

“The first season of Shrill has only just made its way to the UK. This sneakily affecting comedy is a loose adaptation of Lindy West’s memoir. Despite its flaws, though, Shrill drew me in. It is darker than it first seems, and far more subtle. At only six episodes, it is short, sweet and pleasingly sour.”
Rebecca Nicholson

“The penultimate offering didn’t pack as much emotional punch, but Dafne Keen has shown great poise and skill as Lyra, and although the parts based in our real world interest me less, it’s a production in which the quality has rarely dropped.”
Carol Midgely, The Times