‘There have been objections to the monologues being remade, but they are hard to give much credence to’ 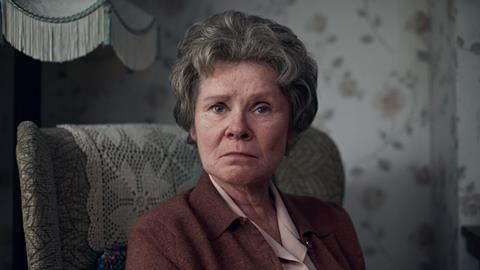 “As a frankly gushing fan-girl of Talking Heads I was dubious about the remakes. I was wrong. The performances by Imelda Staunton and Sarah Lancashire were spectacular. They were take-the-breath-away good. Background music and gimmicks are redundant when the writing is this incisive, Bennett making one laugh and feel desperately sad within a single sentence. Sarah Lancashire’s monologue was written last year, Staunton’s in the 1980s but Bennett’s pen has not blunted with age. His is a world of genteel darkness where we also get words like “mither” and jam made on a rolling boil. There are ten more monologues to come, some not quite as successful as these two, others better than I expected (Martin Freeman had to fill the massive shoes of Bennett himself in A Chip in the Sugar. See what you think). All of them, however, remind that no one writes about quiet, workaday tragedy better.”
Carol Midgley, The Times

“A Lady of Letters was first made famous by Patricia Routledge. This time round, the gig – the gift – goes to Imelda Staunton. There’s no one who evokes domestic menace, ordinary savagery, like Staunton. We can map the descent into bitterness and we can also believe in her redemption when the voids in her life are eventually and unexpectedly filled. It remains a masterclass in everything and still perilously close to magic. There have been objections to the monologues being remade, but they are hard to give much credence to. And monologues are, of course, perfect fodder for lockdown productions, losing nothing to the depredations of the pandemic beyond.”
Lucy Mangan, The Guardian

“Bennett treats all of his creations with compassion, even when their behaviour is hateful. The first episode here was A Lady of Letters, which might just be a perfect half-hour of drama, each line of dialogue revealing another layer. The BBC’s head of drama, Piers Wenger, made a smart move when he decided to bring back the plays, directed by Nicholas Hytner. They’re perfectly suited to socially distanced filming, and lockdown is providing plenty of time for introspection.”
Anita Singh, The Telegraph

“No attempt seemed to have been made to update Bennett’s original scripts. Irene didn’t pester people by email or on Twitter and there were references to “transistor” radios and the novelty of gas central heating. Then again, even now it’s likely that someone of Irene’s vintage might still reach for the Basildon Bond and her “trusty Platignum” rather than boot up the laptop. And Staunton is superb, her hair coiffed in a style reminiscent of the Queen in later middle age – a subliminal reminder of the delectable prospect of Staunton playing Her Maj in the final series of The Crown.”
Gerard Gilbert, The i

“Darkly comic, with sharp observational dialogue, all of Bennett’s monologues have one thing in common: the characters are deeply troubled souls. Imelda gave a mesmerising performance as Irene, effortlessly moving from outrage and indignation to kindness and compassion.Things turned several shades darker in the second episode, An Ordinary Woman, starring Sarah Lancashire. One of two new monologues, she played Gwen, a woman sexually attracted to her 15-year-old son.Again, the performance was compelling, but the material felt unnecessarily provocative as Gwen discussed what she called her ‘Shakespearean’ lust for her son while doing the laundry and baking a pie.”
Claudia Connell, Daily Mail

“Gareth Malone should be prescribed on the NHS. There is something about his manner that lifts the spirits. I confess that the prospect of yet another one of his choir series didn’t fill me with excitement, yet by the time I was half way into The Choir: Singing for Britain, I felt cheered to be in his company. Malone has spent lockdown inspiring people to sing along from their sitting rooms via his online Home Chorus sessions. In this programme, a hand-picked few were given a moment in the spotlight. The entertainment value of the programme was limited by circumstances: “It’s rubbish being here when they are out there. Basically, I’m just in my garden with a cup of tea,” he said.”
Anita Singh, The Telegraph

“One of the cruellest effects of Covid-19 is the way it has restricted human interaction. Social distancing sabotages togetherness, which makes collective singing tricky. A great shame, since singing in a choir can be terrific therapy for depression or loneliness. However, choir supremo Gareth Malone (now sporting a shaggy lockdown haircut) doesn’t give up easily. With The Choir: Singing for Britain, he has made the best of what technology has to offer to create an online facsimile of the choir-singing experience.”
Adam Sweeting, The i

“Gareth’s puppy dog enthusiasm for every project is infectious and there’s no arguing with his ability to bring out the best in people. But Zoom is no substitute for real interaction which, sadly, meant this show lacked the usual Malone magic.”
Claudia Connell, Daily Mail

“Roswell, New Mexico, an entertaining US drama series, the object was a flying saucer. Unknown to the locals, alien survivors from the crash have been living among them ever since. It’s as if a group of adult characters got stuck in a teen drama, since they’re all hung up on events that happened more than a decade earlier. There are references to anti-Mexican racism, Trumpian politics and deplorable patriarchal attitudes, but the show is best enjoyed as schlocky escapism, given a blast of extra-terrestrial weirdness whenever the narrative is in danger of dozing off.”
Adam Sweeting, The i